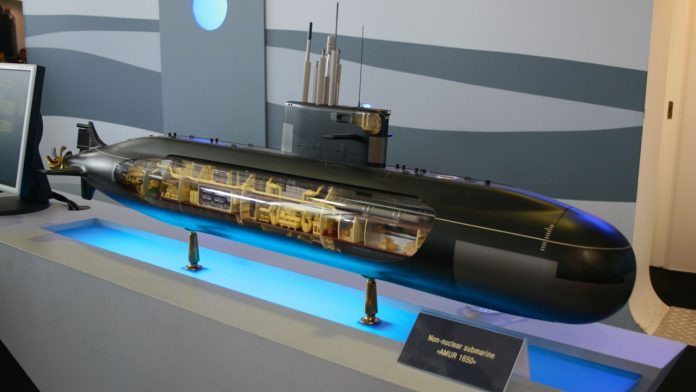 Rosoboronexport, a member of Rostec, will set up a Russian display at the 10th Exponaval 2016, an international maritime defense exhibition. This anniversary iteration is to take place at the Naval Base in Viña del Mar, Chile, on 29 November – 2 December. The Russian delegation is led by the Russian Federal Service for Technical and Military Cooperation.

“Rosoboronexport is seeking opportunities at Exponaval 2016 to promote naval weapons and equipment in the region. Russia ranks Latin America among the most promising regions for the development of military and technical cooperation with due considerations given to the plans of such states as Chile, Argentina, Brazil, Columbia, Mexico, Peru, and Venezuela to upgrade their equipment and purchase modern, advanced weapons for their military forces,” says Rosoboronexport’s Naval Department head Oleg Azizov, who will lead the company’s team at the event.

Rosoboronexport’s booth is No. 160-N occupying 59.5 m2. It has around 200 military products displayed in different forms.

Specialists of the company believe that in the surface ship segment the most promising future in the region faces the Mangust high-speed patrol boat (Project 12150), Mirazh patrol boat (Project 14310), Project 10410 border guard escort ship, and Gepard-3.9 frigate, a derivative of the Project 11661 escort ship. Among submarines Project-636 and Project-1650, dubbed the Amur-1650, both conventional, are expected to be the most popular there. Obviously, the Caliber-PLE and Caliber-NKE integrated missile systems, already combat-proven, as well as  Bal-E and Bastion mobile shore-based missile systems, and UGST versatile deep-water homing torpedoes will catch the attention of visitors.

Rosoboronexport contemplates heightened interest of the countries in the region in Arctic products, manufactured by Russian companies. These include hydrographic survey vessels and icebreakers, as well as the Mi-26T2 that has already demonstrated its effectiveness in the Arctic.

There will also be technical conferences, presentations, and seminars. Rosoboronexport’s team will have a very tight business schedule at Exponaval 2016. Already fitted into it are several meetings with military representatives of Latin American countries, as well as heads of other agencies, and top managers.

Rosoboronexport is the only state-owned arms trade company in the Russian Federation authorized to export the full range of military and dual-purpose products, technologies and services. It is a subsidiary of the Rostec Corporation. Founded on 4 November, 2000, now Rosoboronexport is one of the leading world arms exporters to the international market. Its share in Russia’s military exports exceeds 85 percent. Rosoboronexport cooperates with more than 700 enterprises and organizations in the Russian defence industrial complex. Russia maintains military technical cooperation with more than 70 countries around the world.

Rostec State Corporation is a Russian corporation founded in 2007 to promote the development, production, and export of high-tech industrial products for civil and military purposes. It is comprised of more than 700 organizations, whereof 9 holding companies presently operate in the military-industrial complex, 6 organizations are in civilian industries, and 32 are direct control organizations. Rostec’s portfolio includes famous brands such as AVTOVAZ, KAMAZ, Kalashnikov Concern, Russian Helicopters, VSMPO-AVISMA, etc. Rostec companies are located in 60 federal subjects of the Russian Federation and supply products to the markets of over 70 countries. In 2015, Rostec’s consolidated revenues topped 1,140 billion rubles. The corporation’s average wage in 2015 was 41,000 rubles, and tax payments to budgets of all levels exceeded 160 billion rubles. According to the new Rostec strategy, the main objective of the corporation is to provide Russia with a technological advantage on highly competitive global markets. The planned investment volume for development through 2025 is 4.3 trillion rubles.