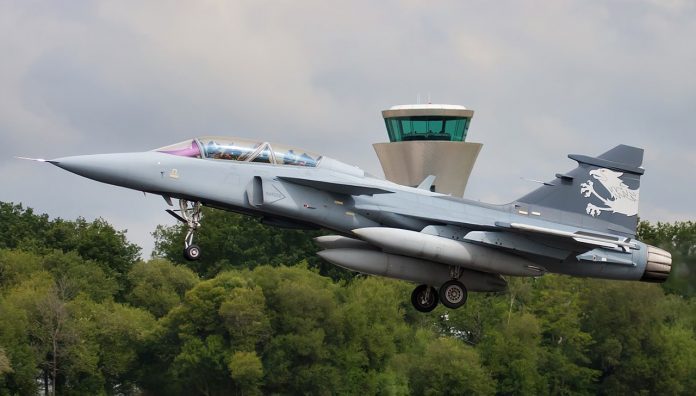 Saab has told asianmilitaryreview.com that it is proposing to transfer manufacturing and assembly capabilities for the company’s JAS-39E/F Gripen fighter to India.

According to Jerker Ahlqvist, head of Gripen at Saab’s aeronautics division the company was proposing to develop a so-called Gripen Design and Development Network (GDDN) for India. This would be based upon a similar facility that the company opened in October in Brazil, following the Força Aérea Brasileira (Brazilian Air Force) selection of 28 JAS-39E aircraft in December 2013. The GDDN would be established, Mr. Ahlqvist continues, should any JAS-39E aircraft be ordered by India in the future.

Saab has received an “expression of interest” in licence-built JAS-39E/F fighters to replace its ageing fleet of 200 plus MiG-21 family fighters in the country’s air force, media reports stated in October. Although declining to mention a specific timeline, Mr. Ahlqvist added that the next step for the Indian GDDN initiative would be to issue a request of proposals with local partner companies which would initiate supplying the JAS-39E/F’s entire manufacturing and assembly lines, with full technology transfer, to India.

Mr. Ahlqvist added that Hindustan Aeronautics Limited (HAL) is looking for foreign design assistance for the firm’s Tejas-Mk.1A/2 fighter for the Indian Air Force (IAF). The IAF is seeking specified capability improvements that include an AESA (active electronically-scanned array) radar and a more capable electronic warfare suite which would necessitated design changes for the aircraft, in addition to other minor improvements.

Saab is proposing to offer its AESA X-band (8.5-10.68 gigahertz) fighter radar to HAL for the Tejas-Mk.1A/2 upgrade programme. Saab told asianmilitaryreview.com that it is willing to customise the radar as per India’s requirements jointly with HAL, and also manufacture the radar in India in cooperation with Indian companies.