Home Features From our Correspondents SeaSpider Crawls Out 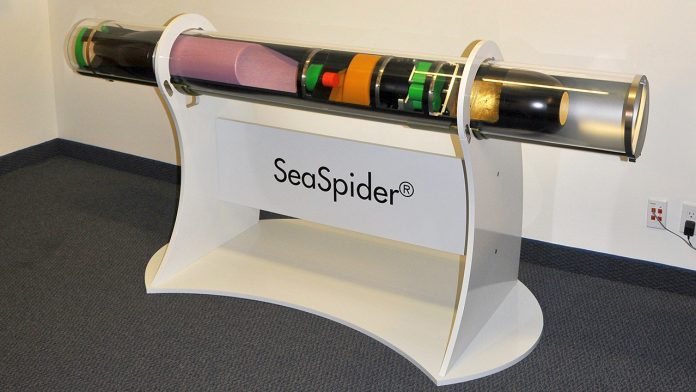 Sources have confirmed to asianmilitaryreview.com that test-firings of Atlas Elektronik’s SeaSpider Anti-Torpedo Torpedo (ATT) are expected to occur by the end of the decade.

The SeaSpider will be a containerised system which will have a single ATT round-per-canister; a single launcher system will comprise four canisters to minimise the footprint on the upper deck of a ship. Once fielded, the ATT will provide navies with a robust hard-kill defence capability against all torpedo threats for surface vessels and submarines, whether in the open ocean or in the littoral. Submarines will be able to launch the ATT from their torpedo tubes, although the firm has declined to reveal when fielding could take place, adding that this will be dependent upon test results.

Rick Gerbrecht, president and chief executive office of Atlas Elektronik’s Canadian operation told asianmilitaryreview.com: “We’re currently at Technology Readiness Level-6 (where the system is ready to be tested in prototype form in a relevant environment) in the homing head, and we’ve patented the rear section. Our focus now is to have all aspects of this programme moving in unison so that we can get to (the) production capability in time for the construction of the future Canadian Surface Combatant (CSC).” The CSC develops a new class of up to 15 surface combatants, according to Canadian government requirements, which will replace the Royal Canadian Navy’s existing ‘Iroquois’ and ‘Halifax’ class destroyers and frigates with a single new design from circa 2020. The Canadian government has articulated a requirement for a torpedo hard-kill system for these surface combatants which is outlined in the official 2016 Defence Acquisition Guide specifying Canadian procurement opportunities for the defence industry.

Current plans call for testing of the ATT to be carried out at the Canadian Forces Maritime Experimental and Test Ranges (CFMETR) in Nanoose Bay, British Columbia, on Canada’s Pacific coast, and at Atlas Elektronik’s test facilities in Germany. Sources have told asianmilitaryreview.com that this test programme will culminate in live firings occurring in Germany and Canada, eventually being performed from ships, towards the end of the decade.