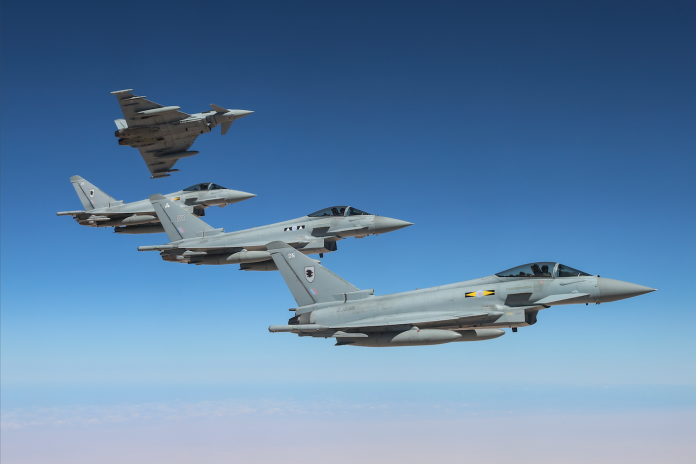 Eight Typhoon-F/GR4As flown by the RAF’s 6 Squadron departed their home base at RAF Lossiemouth, northern Scotland on 12th and 13th January bound for the Azores, for a mid-Atlantic stop, before continuing to the US. They were accompanied by an RAF Airbus A330-300 Voyager tanker, and are expected to be in the US for a couple of months.

Exercise RED FLAG provides the RAF with a chance to test the skills of the pilots and some of the latest equipment to be integrated onto the aircraft. All the RAF’s so-called ‘Tranche 2/3’ Typhoon-FGR4s are being upgraded in a series of phased enhancements that will see the aircraft receive a comprehensive air-to-ground capability by April 2019.

It is a very busy time for the RAF’s Typhoon Force, with jets expected to man a NATO (North Atlantic Treaty Organisation) Quick Reaction Alert in Romania for four months in the second quarter of this year. This follows on from a recent NATO Baltic Air Policing deployment to Estonia. Meanwhile in mid-2016, four aircraft from the RAF’s 2 Squadron provided a NATO QRA at Amari airbase in northern Estonia from 1 May 2016 to 31 August 2016. They were participating as part of the RAF’s Operation AZOTIZE, instituted in April 2016, to deter threats in the Baltic region. During the operation, the RAF jets were scrambled on 21 occasions to intercept unidentified aircraft, mostly Russian.