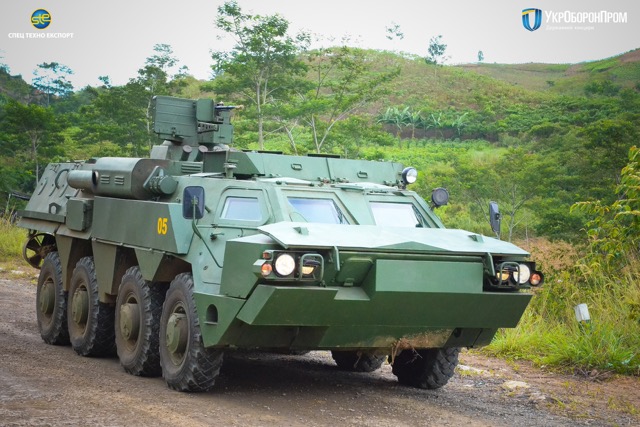 Representatives of various departments of the Ministry of Defence of Indonesia controlled 100 km long march of combat vehicles. A number of different trials in different conditions have successfully been conducted: sea trials of amphibious capabilities, firing tests in the mountain areas and mobility characteristics of Ukrainian combat vehicles on the road and on rough terrain.

During the tests of amphibious capabilities, combat vehicles acted in the water steadily and smoothly. These new armored vehicles capable to cross inland water obstacles without any changes in configuration.

Each of five BTR-4M successfully passed mobility trials and hit defined targets on specified distances, demonstrating accuracy of Ukrainian weaponry. Indonesian journalists were frankly amazed by capabilities of the “Parus” combat turret, mounted on the BTR-4M, as well as by the modern digital sighting system.

“SFTE “SpetsTechnoExport” will continue to introduce latest developments of Ukrainian defense industry on international markets. Our approach is to deliver tailor-made solutions meeting the demand and requirements of each foreign partner. BTR-4M  for Indonesian Marine Corps is a good example of a customized product for a certain customer, where “SpetsTechnoExport” adjusted standard configuration of BTR-4 to the specific needs of Marines. Other modifications of BTR-4 will also be tailored and produced with initial support and involvement of our company” – emphasized Pavlo Barbul, director of “SpetsTechnoExport” .

Available space of the engine compartment allows installation of more powerful engines in case of necessity.

BTR-4M in its standard version equipped with uninhabited combat turret BM-7 “Parus” with a 30-mm automatic gun ZTM-1, 30 mm grenade launcher and 7,76 automatic gun, “Barrier” antitank guided missile system, however a number of different combat turrets are available for integration depending on the customer’s needs.

BTR-4M belongs to a promising class of wheeled combat vehicles, which can perform a wide range of tasks in modern war. It’s a basic vehicle for equipping quick-reaction forces and marine units, fulfilling day-and–night tasks, under various climate conditions (operating temperature range from -40 up to +55 C), off-road and on hard-surface.

These combat vehicles can be equipped with different weaponry capable to destroy enemy armored vehicles including tanks. Additional protection systems can be also installed optionally: against fragment of large-caliber projectiles or small-caliber automatic guns and projectiles.

The practical use of BTR-4 has proven the highest level of crew and troops protection when performing combat tasks in eastern Ukraine.

We remind that SE “Spetstechnoexport” featured a new development of Ukrainian engineers on the exhibition “Arms and Security 2016” – tactical unmanned multifunctional complex “Fantom”, which has already proved its combat capabilities in difficult weather conditions.

The State Enterprise “SpetsTechnoExport” is one of the biggest exporting companies, part of the SC “Ukroboronprom”, specializes in foreign economic activities for export and import of modern armament, military equipment and technologies, as well as special purpose products. “SpetsTechnoExport” works closely with Ukrainian enterprises, research centers, design bureaus, public and private companies from over 30 countries across the globe. More information at: https://spetstechnoexport.com/.