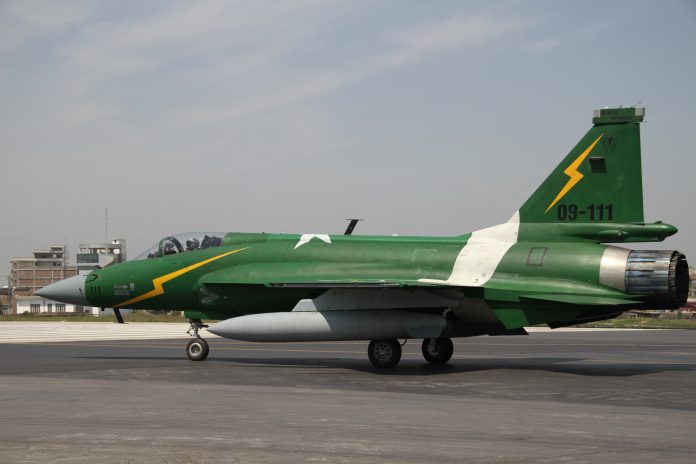 This year is going to be massive for the JF-17/B Thunder fighter. The Sino-Pakistan aircraft, which is being built by the Pakistan Aeronautical Complex (PAC), should achieve more milestones in 2017.

The first flight of a dual-seat JF-17B, is expected to take place by the end of the second quarter. Air Marshal (AM) Arshad Malik, the PAC’s chairman, told asianmilitaryreview.com: “These are very exciting times for an aircraft which will help to shape the future of the Pakistan Air Force (PAF).” AM Malik continued that 2016 had been a very busy year, which saw the projected delivery of 16 aircraft to the PAF, being completed by the end of the year.

In 2017, PAC will build 14 single-seater JF-17s to complete the 50 aircraft ordered in JF-17 Block-2 status, the production of which commenced in December 2013: “We can increase our output even further to cope with future exports,” AM Malik added. On the export front, the Nigerian media recently announced that the Nigerian Air Force had ordered three JF-17s, but no further details are known.

Initially, three JF-17Bs will be built, two of which will equip the PAF. Having a two-seater in the testing and development programme, will speed up the integration of more weapons according to the CATIC (China National Aero-Technology Import and Export Corporation) which offers the aircraft in its portfolio. At the same time, it will allow potential customers to actually experience the aircraft, rather than rely on a simulator.

Meanwhile a contract for 50 JF-17 Block-3s is expected to be signed in the first half of this year, which will ensure production does not halt when all the JF-17 Block-2 aircraft are completed. The most advanced version of the Thunder will include new avionics, better electronic warfare systems, increased payload and more sophisticated weapons.

The Block-3 variant will be the ultimate JF-17 with an AESA (Active Electronically Scanned Array) X-band (8.5-10.68 gigahertz) radar replacing the older Nanjing Research Institute of Electronic Technologies’ (NRIET) KLJ-7 X-band fire control radar equipping legacy versions of the aircraft. Two possibilities exist for the JF-17 Block-3, including NRIET’s enhanced KLJ-7A while Leonardo is also believed to have approached the PAF with an undisclosed, proposed solution. There is a possibility, if such a requirement is there, that the legacy JF-17 Block-1/2 aircraft flown by the PAF could be upgraded to the Block-3 standard.