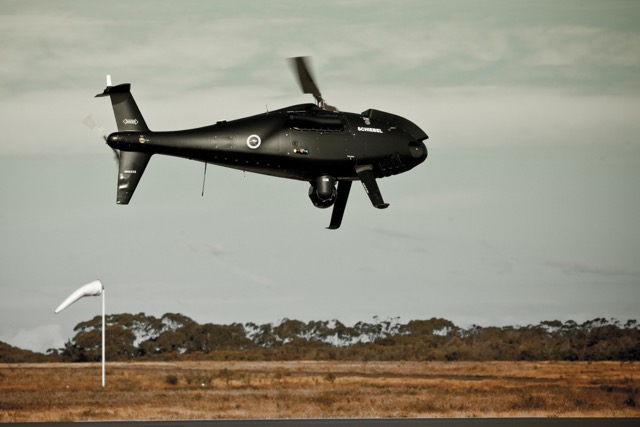 Vienna, 06 February 2017 – The Royal Australian Navy awarded to Schiebel a contract for the supply of its CAMCOPTER® S-100 System and three years of follow-on Contractor Logistics Support.

The Royal Australian Navy released an international Request for Tender (RfT) in late February 2016 for a UAS capability. Schiebel was very pleased to be able to submit a comprehensive proposal to deliver the latest version of its highly successful CAMCOPTER® S-100 UAS. After thorough proposal evaluation and completing negotiations, the contract was signed at the end of December 2016.

Hans Georg Schiebel, owner of Schiebel Group, emphasizes: “We feel most honored by the Royal Australian Navy’s decision to purchase our CAMCOPTER® S-100 UAS. We are sure that the S-100 will prove to be an effective asset that will set a new benchmark for UAS capability.”

As the experience of the company’s diverse maritime customers shows, the CAMCOPTER® S-100 improves the situational awareness of ship-borne operations substantially, making it the number one short-range tactical unmanned aircraft for naval applications.

The CAMCOPTER® S-100 holds an impressive track record of supporting naval customers, with missions successfully completed on over 30 different ships on all the world’s oceans, in every environment from the tropics to the Arctic.

Founded in 1951, the Vienna-based Schiebel Group focuses on the development, testing and production of state-of-the-art mine detection equipment and the revolutionary CAMCOPTER® S-100 Unmanned Air System (UAS). Schiebel has built an international reputation for producing quality defense and humanitarian products, which are backed by exceptional after-sales service and support. In 2010, Schiebel’s new composite division has started to supply high-tech customers with products of supreme carbon fiber technology – all quality-controlled to meet ISO 9001 standards. With headquarters in Vienna (Austria), Schiebel now maintains production facilities in Wiener Neustadt (Austria) and Abu Dhabi (UAE), as well as offices in Washington DC (USA) and Phnom Penh (Cambodia).

Schiebel’s CAMCOPTER® S-100 Unmanned Air System (UAS) is a proven capability for military and civilian applications. The Vertical Takeoff and Landing (VTOL) UAS needs no prepared area or supporting launch or recovery equipment. It operates in day and night, under adverse weather conditions, with a beyond line-of-sight capability out to 200 km, both on land and at sea. The S-100 navigates via pre-programmed GPS waypoints or is operated with a pilot control unit. Missions are planned and controlled via a simple point-and-click graphical user interface. High definition payload imagery is transmitted to the control station in real time. Using “fly-by-wire” technology controlled by a flight computer, the UAV can complete its mission automatically. Its carbon fiber and titanium fuselage provides capacity for a wide range of payload/endurance combinations up to a service ceiling of 18,000 ft. In its standard configuration, the CAMCOPTER® S-100 carries a 75 lbs/34 kg payload up to 10 hours and is powered with AVGas or heavy fuel.