Home Features Press Releases All about Tenders and Qualification 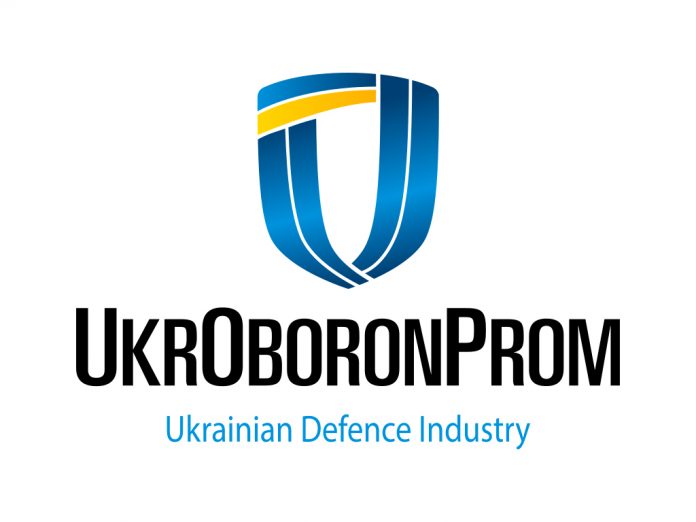 Today the SC “UkrOboronProm” (UOP) saves hundreds of millions of hryvnias through transparent e-tendering. We attract reliable and responsible suppliers, buying spares at best prices, though two and a half years ago the situation was completely different.

In 2014, when the new team headed the State Concern, the enterprises were literally in decline: Rusting and idle production lines, heavy losses, the workers of the enterprises did not receive their wages, increased corruption activities, no cooperation between enterprises.

The country was in the state of war, so there was a need for prompt revival of the defense industry. It became obvious that ordinary measures do not help – there was a need for extreme ones. The new managemet team – most MBA graduates – managed to revive the procurement system and industrial relations, where nepotism ruled. Minimizing the human factor was the main goal.

UOP managers invited the team of Oleksii Scherbatenko IT specialists to improve e-procurement system – Smart Tender, having successfully launched it. We were the first of all the state institutions, having introduced transparent electronic procurement. Later, the same experts took best UOP practices and created Prozzoro, used now by the whole country.

UOP electronic tendering system yielded results immediately. How does it work? We announce an open competition for transparent procurement of materials or spares. Firms submit their proposals, electronic system analyzes those on meeting all criteria and selects the most suitable option. After the first tenders, we saw that this procedure allows spending 2-3 times less money for the purchase of materials.

2 years and 5 months passed from the first public electronic tender (October 2014 – February 2017). During this time, the UOP saved 892 million UAH and conducted 54,700 tenders. Within 3 months of 2014 we had 830 new suppliers, in 2015-7935 more, and in 2016 we had 17 thousand new suppliers registered on e-platforms. Monthly savings through tendering is 35-40 million UAH. We use these funds for production modernization, research and development, creating new jobs, increasing wages. 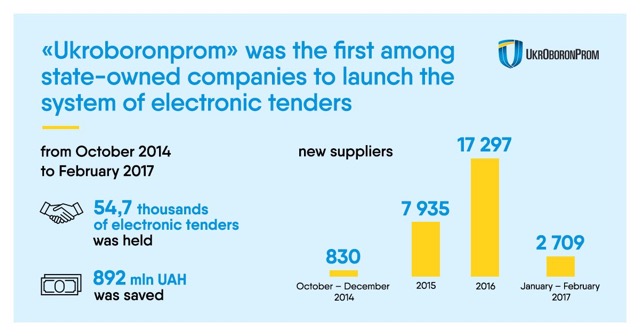 Representatives of “Smart” platform  confirm the effectiveness of UOP electronic trading platforms, naming those one of the most successful projects in Ukraine.

Clear principles allowed to successfully launch the import substitution program and establish cooperation between the enterprises. At the beginning of the war only 55% of components for military equipment and weapons were produced in Ukraine, 10% we imported from Western countries, 35% – from Russia. In the second half of 2014 we completely stopped our cooperation with Russia: 70% of spares were produced in Ukraine, 30% – by Western partners. In 2016 we attracted about 400 enterprises of all forms of property across the country – producing over 1 700 spares, assemblies and components – to the import substitution program. In particular, in the field of armored vehicles 87% of spares are produced in Ukraine, and only 13% are imported from Western countries.

New armored vehicles “Dozor-B” – 17 UOP enterprises and 86 other domestic enterprises of different ownership are engaged in production of “Dozor-B” armored vehicles – are a good example of cooperation. Another example – An-178 production: In 2015 48% of spares were manufactured in Ukraine, 41% – in Russia and 11% – in other countries, while in 2016 we refused using Russian components. 78% of production is concentrated in Ukraine, 22% – in other countries.

As of today, UOP signed 21 memoranda of cooperation in the field of defense industry with regional and state administrations. Over 8,500 companies from all over Ukraine are successfully cooperating with UKROBORONPROM on electronic platforms. 65-70% of them are small and medium business – our target audience. Undergoing the qualification assessment procedure is the only important condition. The procedure lasts for 5 days, requires three documents on financial statements – which are already prepared for fiscal authorities – and filling up a questionnaire.

We understand that the procedure may seem too bureaucratic. But, to begin with, UKROBORONPROM is working in the framework of country’s legislative environment. And secondly, we observe the principle of non-selectivity, believing that the rules must apply to all. We try to convey these important messages to all the companies, participating in tenders. Also, the practice of provider qualification is used by most world’s leading companies.

The system works as a well-established mechanism. But not all are satisfied with transparent and competitive business environment. Many dishonest companies would like to use defense industry as their “sinecure “. Playing into the hands of the enemy, they resort to non-constructive criticism of UKROBORONPROM’s work. However, this proves once again: UOP initiative on using transparent tendering platforms is bringing real results. After all, there is no place for nepotism. Only program code and clear algorithm – based on the laws of open economy and free market – determine the winner.

By working with reliable suppliers only, we guarantee that the necessary spares will timely arrive at the enterprises and the soldiers on the front line will get the necessary equipment just on time and in full.