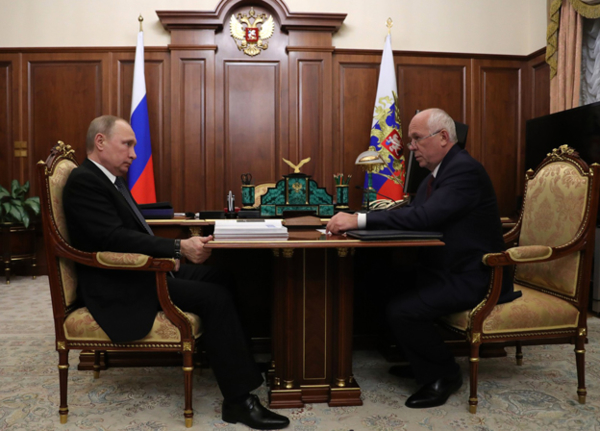 Rostec CEO Sergey Chemezov reported to Russian President Vladimir Putin on the State Corporation’s performance in 2016, announced plans for the development of high-tech industries, presented the results of the industrial digitization and reflected on personnel changes that occurred at the State Corporation.

The completion of the delivery of 151 helicopters to India, the launch of five new Kalashnikov Concern’s production facilities, the opening of Zhukovsky International Airport, the sale of a stake in the Russian Helicopters holding company to the Russian Direct Investment Fund (RDIF), and the completion of the delivery of the S-300 air defence systems to Iran were noted by Rostec CEO as some of the key events of the State Corporation in 2016.

“In 2016, we managed to achieve the stated objectives both in terms of financial indicators and in terms of production results. These include the development of new technological productions, the expansion of sales markets, the creation of products with high added value, the attraction of financial and technological investors to our assets. Thus, in 2016, the State Corporation’s income increased since 2015 to RUB 1,266 billion,” said Sergey Chemezov at the meeting with the President. “The volume of military goods export via Rosoboronexport amounted to USD 13.1 billion. We paid special attention to the digitization of our manufacture and the development of technological infrastructure. An important task for the Corporation in the medium term is to increase the production of civilian goods. In 2016, the volume of production of such goods increased by 11 per cent and reached RUB 374 billion”.

In 2016, Rostec proceeded with the transfer and operational integration of key production assets into the structure of the Corporation. The Corporation received shares of 100 joint-stock companies, including 19 companies that fulfill the state defense order for a number of critical technologies. At the end of the year, the decision was made to transfer the shares of NPK Uralvagonzavod JSC to the Corporation.

Following the proposal of the President of the Russian Federation Vladimir Putin to launch a large-scale system program for the development of digital economy, in 2016, Rostec paid special attention to the digitization of its industrial enterprises and the development of its technological infrastructure based on the State Corporation’s Electronics cluster.

Digital economy has become an important part of the Strategy of Rostec State Corporation, approved in 2015. New “smart” civilian markets shall be the main growth factors. Rostec has identified a number of key areas of civilian products, which present a high growth rate with relatively low entry barriers. These are data transmission and storage, telecommunications equipment, new generation networks, photonics and electronic component base (ECB), security systems (including cybersecurity systems), robotics, etc.

Rostec State Corporation is a Russian corporation founded in 2007 to promote the development, production, and export of high-tech industrial products for civil and military purposes. It is comprised of more than 700 organizations, whereof 11 holding companies presently operate in the military-industrial complex, 3 organizations are in civilian industries, and more than 80 are direct control organizations. Rostec’s portfolio includes famous brands such as AVTOVAZ, KAMAZ, Kalashnikov Concern, Russian Helicopters, VSMPO-AVISMA, Uralvagonsavod, etc. Rostec companies are located in 60 federal subjects of the Russian Federation and supply products to the markets of over 70 countries. In 2016, Rostec’s consolidated revenues reached RUB 1,266 billion, its consolidated net income equaled RUB 88 billion, and the EBITDA was RUB 268 billion. The Corporation’s average wage in 2016 was RUB 44,000. According to the strategy of Rostec, the main objective of the Corporation is to provide Russia with a technological advantage on highly competitive global markets. One of the key objectives of Rostec is to integrate a new technological mode and digitize the Russian economy.