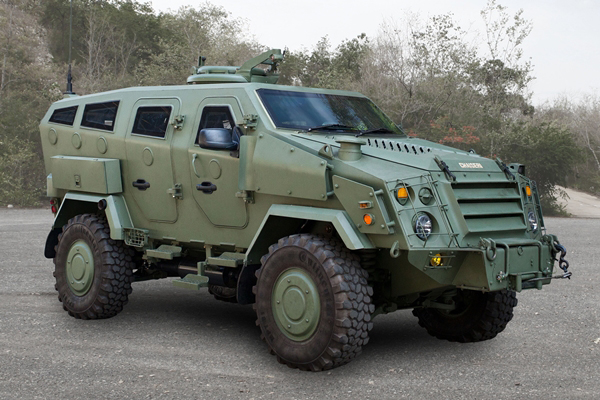 Thai military vehicle manufacturer Chaiseri looks to capitalise on its recent success with its First Win 4×4 multipurpose vehicle, having secured an order from the Thai government’s to supply its Internal Security Operations Command (ISOC) with a number of improved vehicles.

The latest vehicles supplied to the ISOC will be designated First Win 2, an updated version of the original design but equipped with additional protection for increased crew survivability. It features a welded steel armour hull that is V-shaped to deflect explosive forces caused by mines or improvised explosive devices (IEDs). The hull can be optionally protected up to STANAG Level 3 if desired.

With its 300 hp engine mated to a versatile 4×4 or 4×2 drive system, the 11-ton vehicle can carry a two ton payload across challenging terrain. Its design allows it to be transportable by air using a Lockheed Martin C-130 or Airbus A400 military aircraft, roll-on roll-off ships, as well as standard railways.

When configured as a troop carrier, the First Win can carry up to 10 dismounted soldiers in its rear compartment. It can also be adapted to perform ambulance, command post vehicle or specialised weapons carrier roles. Potential armaments include 7.62 or 12.7 mm machine guns, or a 40 mm automatic grenade launcher.

The vehicle is already in operation with the Royal Thai Army and the Thai Ministry of Justice’s Department of Special Investigation. It has also been exported to Malaysia which ordered 20 vehicles for the Malaysian Army in 2015, with six initial vehicles supplied by the company and the remainder built under licence by Malaysian firm Deftech. The vehicles are deployed in operations with the Eastern Sabah Security Command.