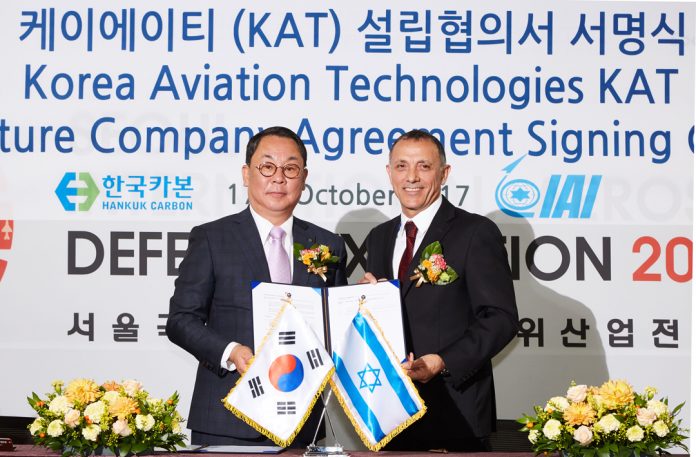 Israel Aerospace Industries and Hankuk Carbon from Korea signed this morning an agreement for establishing a joint venture company in the Republic of Korea.

The signing ceremony was held during the International Aerospace and Defense Exhibition (ADEX) 2017 in Seoul. The new joint company, which was named Korea Aviation Technologies (KAT), will focus on development and manufacturing of unmanned aerial vehicles (UAVs) with vertical takeoff and landing (VTOL) capability that will target the military and civilian Korean market.

The joint company follows the memorandum of agreement entered by the companies in January 2016 and the joint demonstration of the FE Panther* held in December 2016 in Korea. KAT is expected to develop and manufacture the next generation VTOL UAV- with an approximate maximum take-off weight (MTOW) of 300~450Kg and in the future may develop and manufacture other VTOL UAVs for both military and civilian applications. It will support the operational needs of its customers while advancing Korean technologies.

Moon-Soo Cho, CEO from Hankuk Carbon said, “both companies have established a firm relationship within a short period of time, and the result will be passed on to the HC-IAI joint venture. The UAS system with innovative hybrid propulsion system produced under KAT’s name will set up a new standard of the UAV industry. Also, Hankuk Carbon’s composite material and aircraft components business will create a synergic effect with KAT.”

Shaul Shahar, IAI EVP and General Manager of IAI’s Military Aircraft Group, said: “IAI is excited about the establishment of the joint company. Hankuk Carbon brings to the venture strong manufacturing capabilities and know-how. Together with IAI`s UAVs and aircraft design capabilities, the new company will be able to meet Korean military and civilian VTOL requirements. I am confident the collaboration will spur the growth of VTOL systems in Korea.”

*The FE Panther Hybrid – powered Vertical Take Off and Landing UAV uses three electrical motors for vertical lift and an internal combustion engine for horizontal flight. It can endure 8 hours of flight time, carry 6 kg of payload and fly over a maximum radius of 130km.