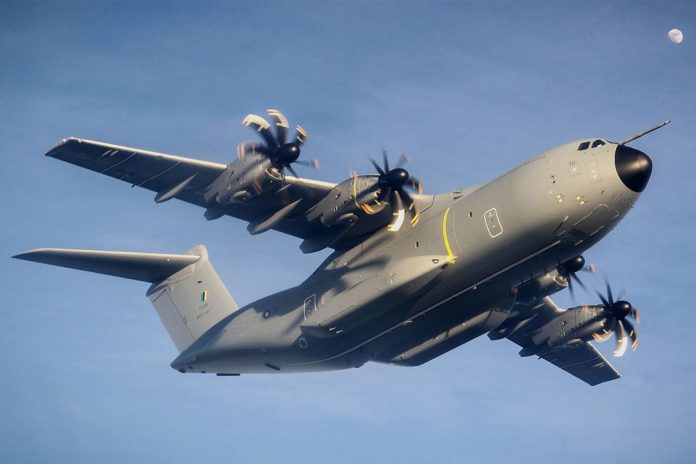 Leonardo has announced a contract, signed with the UK Ministry of Defence, to provide equipment that will simulate radar threats to the RAF’s new A400M transport aircraft prior to take-off.

By simulating threat radars while the aircraft is still on the ground, commanders will be able to ensure that the complex defensive aids suite fitted to the A400M will function correctly during flight and can, therefore, make an evidence-based decision on whether or not to commit to a mission in hostile territory.

The threat simulation equipment provided by Leonardo uses special Radio-Frequency (RF)-emitting ‘hoods’ which will cover the A400M’s sensors while the aircraft is still on the ground, stimulating its RF sensors with real radar energy. The MoD have procured one full system with through-life support, with additional orders anticipated as the RAF’s fleet size grows. As well as ensuring that the A400M’s defensive aids suite is working properly on a mission-by-mission basis, providing ‘capability assurance’ throughout the operational life of the A400M, the use of Leonardo’s equipment will also de-risk and reduce the cost of the aircraft’s flight trials, prior to entering RAF service, by ensuring that as much testing work as possible is carried out on the ground.

Most defensive aids suites, including that on the A400M, come with what is known as ‘built-in test equipment’ (BITE), which signals to the pilot that the equipment is working as designed. However, throughout the life of an aircraft problems can emerge undetected as the aircraft is maintained and operated, for instance RF antenna head sensitivity can degrade, or they can be mistakenly installed incorrectly by being wired into the wrong aircraft quadrant. These type of issues cannot be picked up by BITE, leaving a gap where the equipment is technically operational, but could still endanger the crew as the installation is not operationally effective and could provide limited or incorrect information to the pilot. Leonardo’s ‘capability assurance’ equipment and training closes this gap.

The UK-designed and built capability assurance solution is already in service with the UK’s Typhoon, Tornado, C130J, Wildcat, Merlin and Chinook fleets, making the A400M the 7th UK platform to benefit from using the kit. As well as custom-fitted ‘hood’ equipment specific to the A400M, Leonardo will also provide its off-the-shelf handheld threat simulator, allowing crews to conduct a last-minute check immediately before taking off for a combat operation.

Rosoboronexport to be official sponsor of MAKS-2021 Air Show