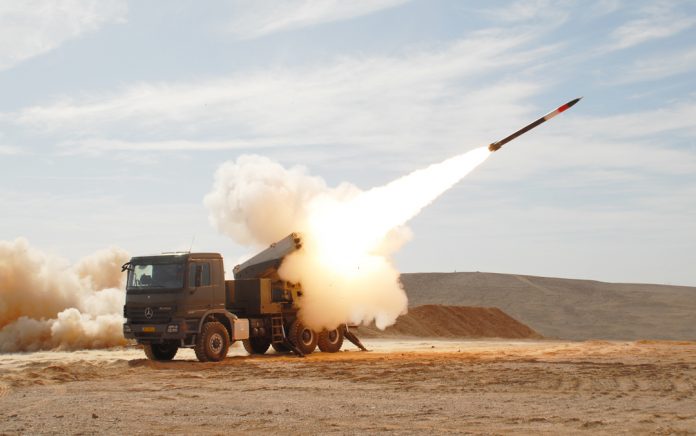 Israel’s IMI Systems has developed a comprehensive portfolio of precision rockets covering the 30 to 300 km range in recent years and is gradually expanding its presence in the Asia Pacific region.

The latest entry to this range is its Spear (Romach) precision system, which was recently operationalised by Israel Defense Force Artillery Corps. “The Spear system is a significant multiplier of strength for the IDF and the Artillery Corps,” said an IMI Systems statement.

Spear is a precision rocket that can be deployed to support manoeuvring forces and strike targets at ranges of 40 km, with a key feature being its accuracy. IMI claims a circular error probable (CEP) of less than 10 metres.

“The Spear is designed to neutralise a number of targets on the battlefield and provide close assistance to the combat forces for short firing ranges,” IMI Systems said in a statement. “The relative advantage of the rocket lies in its high operational availability, simple operation and ability to attack in any weather.”

The Spear joins other precision weapons in IMI Systems’ guided rocket portfolio alongside the low cost EXTended Range Artillery (EXTRA), which can carry up to 120 kg of payload and engage targets from distances of 30 to 150 km, as well as the Predator Hawk which employs the aerodynamic technologies as the EXTRA rocket and is capable of engaging targets out to 300 km with a 140 kg warhead. Like the Spear, both EXTRA and Predator Hawk guided rockets feature a CEP of 10 metres or less.

IMI Systems is also expanding its presence in the Asia Pacific region. In early 2017 the Vietnam Ministry of National Defence announced that the company has established a permanent team in the country which will partner with indigenous firms on research and development.

ITPS wins one of its largest flight testing contracts

Keeping Them Flying and Effective