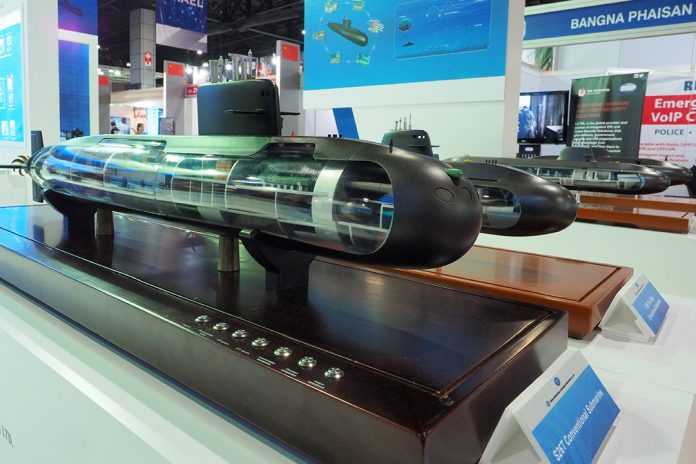 The China Shipbuilding and Offshore International Company (CSOC) is aiming to leverage on its latest success with the Royal Thai Navy, which signed a $393 million (THB 13.5 billion) contract to acquire a 2,550 tonne S26T diesel-electric submarine in May, to increase its market presence in the region.

The S26T is customised for the RTN though based on the latest Yuan-class submarine in service with the People’s Liberation Army Navy (PLAN). It measures 77.7m long, 8.6m wide and can operate at depths of up to 300m.

Featuring air-independent propulsion (AIP) technology, the S26T can remain submerged for 20 days at a stretch without resupply, while endurance is greatly extended to 65 days when using mixed AIP and conventional diesel-electric modes.

“Our submarine and package won over bids from other leading Western companies from countries such as Germany, Russia, and Sweden, which demonstrates the maturity of our design,” a CSOC official said.

The company has also unveiled a trio of designs that share similar technologies employed in the S26T, with these displacing 1,100 tonnes, 600 tonnes, and 200 tonnes to address a wide range of requirements and budgets.

The 1,100 tonne submarine is 60m long with a submerged AIP range of 800 nautical miles (nm), while the 600 tonne model is 50m long with a submerged range of 400nm. While these multirole designs have been optimised for high end naval operations such as anti-surface and anti-submarine warfare, the 200 tonne, 30m long design is configured for covert missions with the ability to carry eight special forces operatives in addition to its six-person crew.