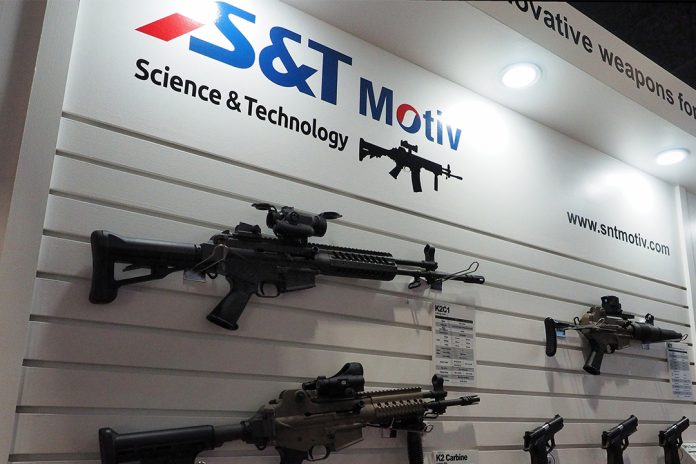 South Korean firearms developer S&T Motiv, formerly Daewoo Precision Industries, is seeking to expand its footprint in the Asia Pacific, particularly in the Southeast Asia region where it has enjoyed some recent successes.

S&T Motiv has delivered around 400 K7 9mm calibre silenced submachine guns to Indonesia. The K7 is a derivative of the company’s K1A 5.56mm assault rifle but chambered to fire 9x19mm ammunition. It is fitted with a large multi-baffle sound suppressor unit that is permanently secured over a short perforated barrel. The company said this reduces the noise signature of the weapon to 111 decibels.

Also being showcased at Defence and Security Thailand are the latest variants of its K2 5.56mm assault rifle which is in service with the Republic of Korea Army (ROKA).

The K2C1 is being produced in short (310mm) and long barrelled (465mm) models and features a quad-rail type MIL-STD-1913 Picatinny rail barrel shroud which replaces the polymer grip found on the original K2. The long barrelled K2C1 has an unloaded weight of 3.68kg, while the short barrelled model weighs 3.3kg. In contrast, the original K2 assault rifle weighs 3.37kg unloaded.

The company has also developed the K2 Carbine which is already in service with South Korea’s special forces. The weapon weighs 3.3kg unloaded.

S&T Motiv is aiming to secure a contract to build the next generation service rifle for the ROKA, which is expected to enter production around 2018 and introduced into service by 2021.