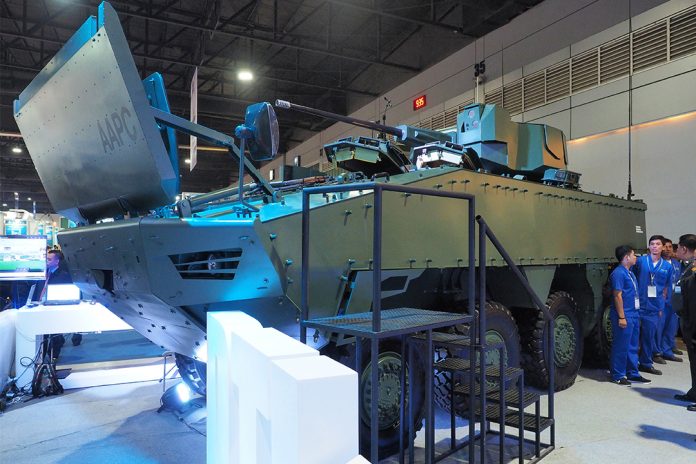 Thailand’s Defence Technology Institute (DTI) has unveiled its latest 8×8 Amphibious Armoured Personnel Carrier (AAPC) which it is developing specifically to meet the requirements of the Royal Thai Marine Corps (RTMC).

The latest AAPC prototype, which was built by Chawalit Public Company Limited with input from Singapore Technologies Kinetics, has a combat weight of up to 30-tonnes and measures around eight metres long and three metres wide. The proposed weapons fit for the vehicle is a remote weapon station armed with a 30mm calibre gun, although it could also carried a range of other manned or unmanned turrets if desired up to a maximum weight of two tonnes.

According to DTI, work on the AAPC commenced around 2016 and leverages on the experience gained from the development of the ongoing 8×8 Black Widow Spider armoured vehicle that is currently being trialled by the Royal Thai Army.

The AAPC is operated by a crew of three, including the driver, commander, and gunner, and can carry up to 11 fully equipped marines. The RTMC has specified a swimming speed of at least 10km/h, a requirement which DTI says has been achieved with a specially designed floatation kit which enables it to operate in the water in conditions of up to Sea State 3. Two rear-mounted propulsors provide the vehicle with a maximum swimming speed of around 10 to 15 km/h.

The vehicle is expected to be delivered to the RTMC for user trials by the end of 2018.

From our Correspondents December 17, 2018