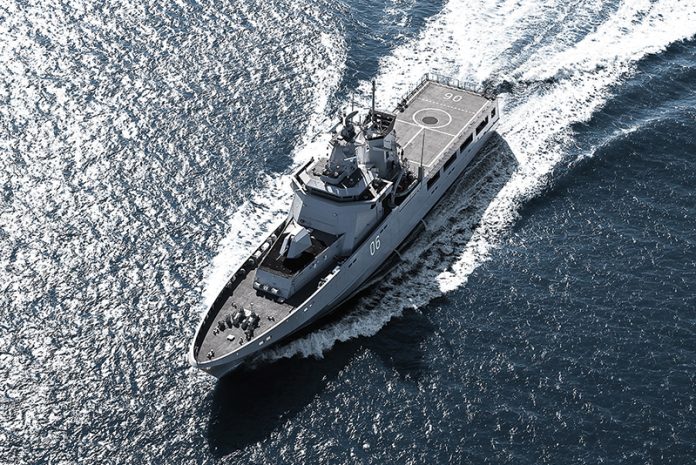 Germany’s Lürssen has been awarded the prime contract for Australia’s Sea 1180 Offshore Patrol Vessel (OPV) in a contract worth at least $3 billion. The Lürssen was selected over proposals by Damen and Fassmer also of Germany while Huntington Industries from the US had also shown earlier interest.

Twelve vessels will be built with work shared by ASC in Adelaide, Western Australia and Austal and Civmec in Henderson located in Southern Australia. The split OPV build program is intended to fill the gap in shipbuilding programmes between the end of the AWD construction in 2018 and the beginning of the Future Frigate programme in 2020. Lürssen’s design is based on its OPV80 which is also in service with the Brunei Navy.

The design is noteworthy for its spacious layout for additional equipment, with the stern ramp RHIB launch and recovery system, and large helicopter flight deck. The vessel will have a displacement of around 1700 tonnes and a length of 80 meters. Their speed is around 20 knots while they have greater range and endurance than the current Armidale Class Patrol Boats they are replacing.

The vessel will have a 40mm Bofors gun and modular mission packs including unmanned aerial systems. It has a crew of 40 but can accommodate up to 60. The vessels will utilize a modular mission payload system similar to that used by the Danish Navy and the United States Navy’s Littoral Combat Ships. Mission equipment will be fit into 20 foot containers and placed onto the ship as needed for assigned tasks. A MoD spokesperson suggested that “The new OPVs will operate alongside Australian Border Force vessels, other Australian Defence Force units and its regional partners.” Contraction will begin in 2018 with the first vessels are expected to enter service in 2021.