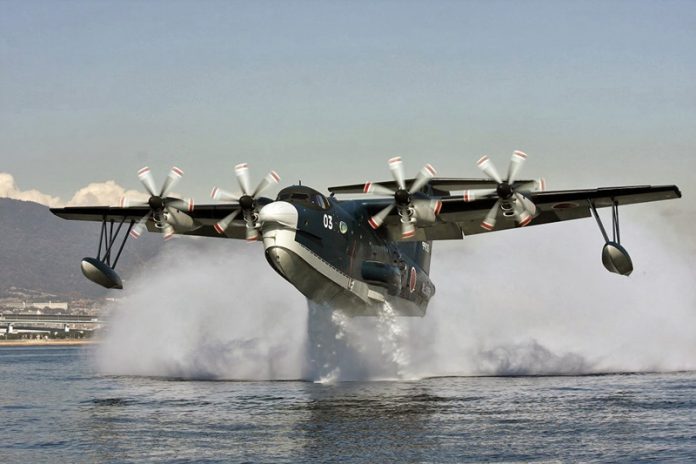 Mahindra Defence has been chosen to partner Japanese manufacturer ShinMaywa Industries in support of a potential sale of turboprop-powered amphibious US-2i aircraft to the Indian Navy.

Under the terms of the Memorandum of Understanding (MoU), which was signed on the sidelines of the Chennai DefExpo 2018, Mahindra and Shinmaywa will establish local MRO (maintenance, repair, and overhaul) facilities for the aircraft and, according to some sources, will also put in place unspecified manufacturing and assembly facilities for ‘structural parts and components’ for the US-2. The Times of India’s headline that the: “Amphibious Aircraft US-2 (is) to be made in India” is believed to be inaccurate, at least insofar as the initial batch of aircraft is concerned.

The original Indian plan was to procure 12 off-the-shelf, Japanese-built aircraft possibly followed by up to 18 domestically produced aircraft, in line with the ‘Make in India’ initiative espoused by India’s Prime Minister, Narendra Modi.

The $1.65 billion deal would be Japan’s largest defence export since it lifted its self-imposed ban on the export of defence equipment in 2014.

The US-2 is a modernised derivative of the ShinMeywa US-1A search and rescue amphibian (the last of which was retired in December 2017), incorporating more powerful Rolls-Royce AE 2100 engines, a pressurised hull, and numerous aerodynamic refinements. A BLC (Boundary Layer Control) system confers remarkable STOL performance.

Five US-2s are reportedly in service with the Japan Maritime Self-Defense Force (JMSDF), operated by 71 Kokutai (the 71st Fleet Air Squadron), part of the 31 Kokugun (the 31st Fleet Air Wing) at Iwakuni air base. The JMSDF has a requirement for 14 US-2s. The aircraft are used for Exclusive Economic Zones (EEZ) protection, surveillance and search & rescue operations, crew rotation at sea, and the supply of spares to ships.

Yasuo Kawanishi, the director of ShinMaywa Industries said: “This versatile aircraft is ideally suited for Indian conditions. The US-2 with its unmatched capability is considered to be extremely useful for strengthening the safety and security of SLOCs, long-range Fleet Support and Island/Offshore assets (both overseas and coastal) support functions. These missions, when combined in a single multimodal platform such as the US-2, can earn for India the precious goodwill of nations of the Indian Ocean region commensurate with its identity as a responsible rising power.”

The agreement between Mahindra and ShinMaywa is the first sign that India may finally be moving forward with its long-awaited US-2 procurement, which has been stalled due to funding, costs and disagreements about transfer of technology.

ShinMaywa and Mahindra reportedly envisage establishing a strategic partnership to work together on future versions of the aircraft, which may include export aircraft for Thailand and Indonesia, which have been cited as prospective customers.

The Need for SEAD