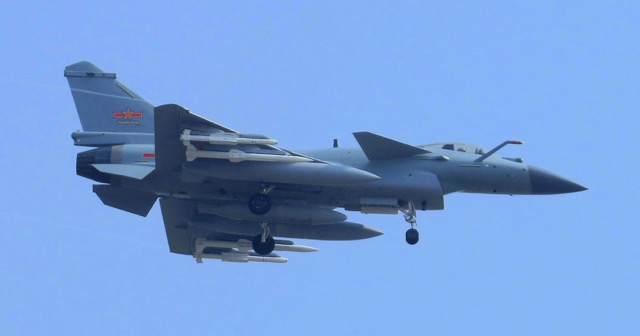 The new J-10C represents a quick, relatively low risk solution to Chinese requirements, and is likely to replace older Su-27s (and early licence built J-11s), and to augment the 280 or so earlier J-10As, J-10Ss and J-10Bs in service with the PLAAF and PLANAF (People’s Liberation Army Naval Air Force).

The J-10C is equipped with modern avionics including an indigenous Active Electronically Scanned Array (AESA) fire-control radar and the aircraft incorporates a range of signature reduction measures, and a new defensive aids system.

These will allow the J-10C to augment the newer, fully stealthy ‘Fifth Generation’ J-20, which entered service in, but which is expected to serve in relatively small numbers.

The original J-10A was superseded by the upgraded J-10B, which featured a new glass cockpit based on that of the JF-17, an X-band PESA (Passive Electronically Scanned Array) radar, an electro-optic targeting sensor and a lighter, stealthier, higher mass flow diverterless engine intake. The first J-10B made its maiden flight on 23 December 2008.

The Russian Lyulka-Saturn AL-31FN turbofan engine was finally replaced by the Chinese WS-10B turbofan during production of the J-10B. The J-10B has now ceased production in favour of the further improved J-10C.

The J-10C was officially unveiled in August 2017 during the PLA 90th Anniversary parade at Zhurihe military training base in the Inner Mongolia Autonomous Region.

Development of a new J-10 variant may already be underway, with reports that any new version would be equipped with conformal fuel tanks and a more powerful WS-10IPE turbofan engine with thrust vectoring.