Home Print Articles 2018 The Naval Workhorse – The Rise of OPVs 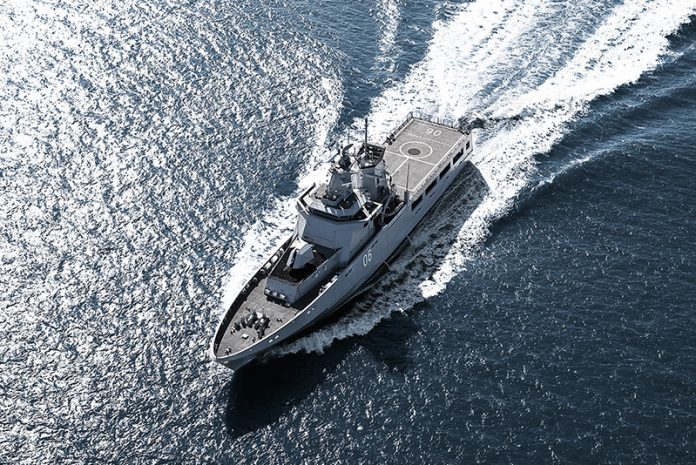 The Asia-Pacific region has traditionally been the domain of the corvette as naval requirements were focussed on warfighting ships with a need for a large number of weapons and sensors. But this has started to change with more Offshore Patrol Vessels (OPVs) entering the market as well.

This is a reflection of the emerging security environment, restricted budgets and recognition of the value of OPVs as a less expensive multipurpose vessel to carry out non-warfighting maritime tasks such as counter-piracy, patrolling, counter drug trafficking, preventing illegal fishing, search and rescue and more.

Piet van Rooij, design and proposal manager at Dutch shipbuilder Damen Naval Shipbuilding told Asian Military Review (AMR) that most of the navies and coastguards in the Asia-Pacific region “had doubts about OPVs and prefer to have corvettes and frigates, but budgets push in the direction of OPVs”. He said the OPV is a budget-driven vessel but it is becoming more mature with navies adding more weapons to provide greater military capability while retaining cheaper operating costs.

“Taking care of the borders, their area of operations, visibility at sea, can be easier done with an OPV than a very costly frigate or corvette.” He added that regional navies are more focused on OPVs “now or in the near future” because of the tensions in the area and “unrest in many countries.”

Countries in the region tend to have both a coastguards and navies, with the former more inclined towards OPVs while the navies retain the corvette-size ships. But the set size of an OPV is vague, with the displacement ranging from 1,400 tons to 4,000 tons depending on the requirements. China is pushing the boundaries of coastguard vessel size through by incorporating vessels displacing up to 10,000 tons, triggering a regional reaction to counter this move with bigger ships too.

Damen is delivering its 9014 OPV design to the Vietnam Coastguard in partnership with the domestic shipbuilder the Song Thu Group, which is completing the manufacturing in Danang. The project is initially for two DN 2000 class vessels as part of a coastguard modernisation programme approved in 2014. The first ship was launched six months early in November 2015. For Vietnam it is about securing its economic exclusive zone (EEZ) in the South China Sea and protecting its fishing industry, where China has been encroaching in recent years near the Spratly and Paracel Islands.

“OPV 2400 is the most popular 90 metre vessel,” van Rooij said, “particularly in the Far East as it has a little more size capability than the OPV1800 80m-long version.” This allows for improved helicopters operations, the use of dedicated mission modules, as well as extra space for crew and better sea keeping in rougher conditions.

That is not to say that the company’s 1,800t design has not been successful. The Malaysian Maritime Enforcement Agency (MMEA) is due to receive three 1,800 ton OPVs from a Malaysian Joint Venture company that comprises TH Heavy Engineering (THHE) and Destini Shipbuilding. The ships are being built at THHE’s Pulah Indiah yard to Damen’s OPV1800 design under a contract valued at $160 million that will see the three vessels delivered by mid-2020. These will be the largest ships operated by the MMEA and their ability to mount fast interceptor boats, RHIBs and a 7.5 ton helicopter it will increase Malaysia’s ability to patrol its coastal zones more effectively. The ship’s armament includes a 30mm SMASH cannon from Turkish manufacturer Aselsan and a 12.7mm machine gun.

Indonesia has followed suit. Fresh from the success of its SIGMA corvette/frigate programme (also a Damen design), the coastguard agency, the Maritime Security Board (Badan Keamanan Laut Republik Indonesia – BAKAMLA) will receive new 110m-long OPVs built by PT Malindo Marine to its own design that displaces 2,400 tons and will be named KN Tanjung Datu. Plans are to build a second OPV and more 80m-long patrol ships to enhance BAKAMLA’S capabilities that are sorely lacking in numbers of vessels considering the country’s archipelago geography.

In Thailand the navy is procuring Krabi-class vessels that are built to BAE Systems’ 90m OPV design that is being delivered to the UK Royal Navy (RN) as well to that of Brazil. Clive Marchant, international business development manager for the Asia-Pacific region at the company told AMR that the export of the design also included “technology transfer” with some amendments: “they wanted to change the electrical system to their local standard and they wanted to fit a larger 76mm gun in place of the 30mm gun in the original specification.”

The ships are built by the Royal Thai Navy at the state-owned Bangkok Dock in Sattahip. Thales has been contracted to provide the combat management system but a lot of equipment has been sourced in Thailand or across Asia. The first ship was delivered in 2013 and performed so well that they ordered another. “In the first three years of service that ship had only one month of down time for maintenance. So what they really noted was the reliability you get with a new build ship, compared to many of their vessels in the past that were second hand and pretty old”.

The second OPV has further changes to the design and started construction in 2016. “They moved their Command and Information Centre (CIC) down one deck to give a larger area to operate the ship from and added anti-ship missiles and with a bigger gun it is pretty capable and is more than an OPV now,” Marchant said. It is due to be launched later this year and there is requirement for a further four OPVs.

In the Philippines, another country that has a dire need for more maritime patrol capability to control its EEZ, the coastguard has selected the aluminium-hulled OPV270 ship design from France’s OCEA shipyard alongside four fast patrol boats following a competition. The vessel will be delivered in 2019 and it is the first time the company has been contracted for an OPV of this size having earlier exported smaller variants to Indonesia and Senegal. Financing from the French government was key to the company securing the contract. There are requirements for a further 18 OPVs.

German shipbuilder Lürssen has won the $2.7 billion competition to provide 12 OPVs for the Royal Australian Navy’s (RAN) Project Sea 1180. The company’s OPV80 design beat competition from Damen and rival German firm Fassmer. Construction is due to begin later this year at ASC Shipbuilding in Adelaide, which will build the first two vessels. The remaining 10 will be constructed in the Western Australian marine complex at Henderson using the facilities of domestic shipbuilders Austal and Civmec. How the work will be split between the yards is unclear but the selection of ASC is to ensure that skills are retained in South Australia until the start of the RAN’s Sea 5000 Future Frigate programme. The government expects each ship to take three years to complete with the first due to be commissioned in 2021 and the others following on an annual drumbeat of one per year. In neighbouring New Zealand, there are plans to procure a third Protector-class OPV, probably from BAE Systems, under the 2015-2020 Strategic Plan but no announcement has been made.

After the attacks in Mumbai, India has devoted considerable effort to improving the patrol capability in the Indian Coast Guard, which had until then been a secondary consideration compared to the Navy. The Coast Guard is due to receive seven OPVs from domestic shipbuilder Larsen & Toubro after the company was awarded a contract from the Indian Ministry of Defence (MoD) in March 2015. The first ship was launched in October last year and is undergoing trials, while the second was launched in January 2018.

In 2017 Goa Shipyard Ltd (GSL) completed the delivery of six OPVs for the Indian Coast Guard under a $274 million contract awarded in May 2012. The ships, known as the Samarth-class, are 105m long and displace some 2500-3000 tons. The company has secured another contract to build an extra five vessels with amendments.

The Indian Navy is getting five OPVS under its P-21 programme with Pipavav Shipyard/RDEL, which has launched the first two at its yard in Gujarat. Unlike the Coas Guard OPVs, it has considerable armament including a 76mm Super Rapid Gun from Italian company Leonardo and two 30mm AK-630 air defence guns from Russia.

GSL also delivered a new OPVs to the Sri Lanka Navy (SLN) in July 2017 fitted with a 30mm gun and two 12.7mm guns. The firm has also delivered the fifth of six OPVs to the Sri Lanka Coast Guard (SLCG). Operations by the SLN and SLCG were critical in the war against the Tamil Sea Tigers by defeating the insurgent’s mother ships at sea that hosted the Tigers fast small boat attack capability.

In neighbouring Bangladesh, Italian shipbuilder Fincantieri has delivered four second-hand OPVs to the Coast Guard completing the project in October 2017. The ships were ex-Italian Navy Minerva-class corvettes that were converted by the company under a contract signed in July 2015.

At the same time as developing its maritime constabulary forces with new OPVs, nations in the Asia-Pacific region are also attempting to establish a nascent shipbuilding capability to construct more complex warships with Western assistance in design and production. It is a first step but will require long-term planning and financing to ensure that this success is built upon and does not wither away. But as long as the maritime security challenges are heightened in the region, the focus on shipbuilding and particularly OPVs will remain in place.