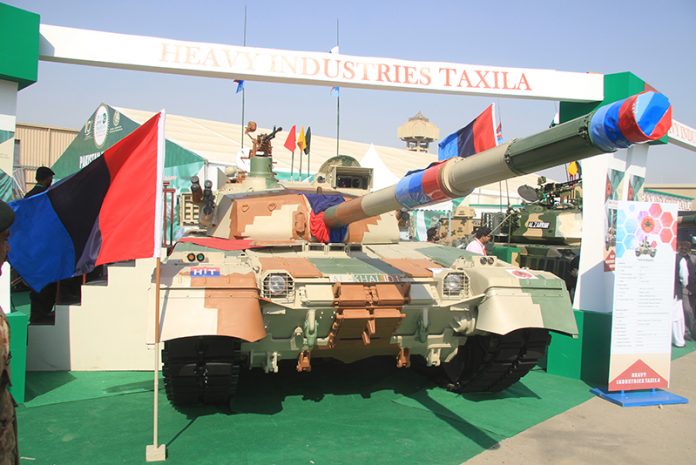 The pride of place for the Pakistan Army at IDEAS is its new main battle tank. After several years of anticipation, the Al Khalid I built by Heavy Industry Taxila (HIT), is making its public debut here.

Among the enhancements to the original Al Khalid tank system is a new digital fire control system that replaces the older analogue set-up.

Operated by a crew of three and armed with a 125mm smooth-bore cannon, it has a capacity of 39+10 rounds onboard.

The commander, sitting in the right seat has a panoramic bi-axis, stabilised sight that designates targets for the gunner in the left compartment. The gunner and commander have dual day/night sights with thermal imaging, allowing accurate fire on stationary and mobile targets. This latest al Khalid is also equipped with a laser warning system to detect incoming ATGMs and an improved radiation detector. A Kharkiv Morozov Design Bureau (KMDB) 6TD-2 liquid-cooled diesel engine powers the 46-48 ton tank. It has a maximum speed of 70km/h.

Al-Khalid is named after the 7th-century Muslim commander Khalid bin al-Walid. The original Al Khalid MBT was jointly developed by Pakistan and China during the 1990s, based on the Chinese Type 90-IIM tank. The original prototype was developed as the MBT-2000, by China North Industries Corporation (Norinco).