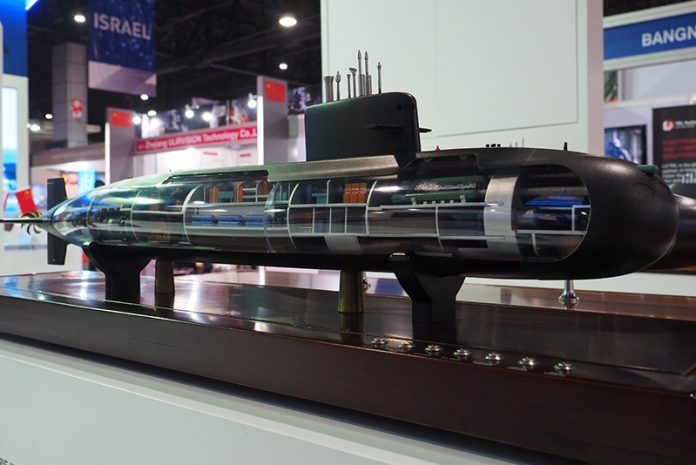 Pakistan has an enduring interest in boosting its submarine fleet capabilities to keep pace with the Indian Navy, a desire that has been further stoked by the first completed patrol of its rival’s 6,000 tonne nuclear-attack submarine INS Arihant in early November.

The Pakistani Navy presently operates five diesel-electric patrol submarines, a number which is considered to fall short of the service’s requirements. The submarine fleet readiness is also of concern, as the two Hashmat-class boats are nearly 40 years old and any one of the three Khalid (Agosta) class is expected to be sidelined for a major refit at any time until 2021.

However, the future appears to be much brighter with Pakistan acquiring eight Chinese-made S20 diesel-electric submarines based on the Yuan-class (Type 039A-series) design, with the first four boats to be built by China Shipbuilding Industry Corporation (CSIC) and deliveries commencing to the Pakistan Navy from 2022. The remainder will be built in Pakistan by the Karachi Shipbuilding and Engineering Works (KSEW), with the boats in service by around 2028..

In terms of general appearance, the S20 design exhibits some of the physical features of the Russian Kilo-class design including a teardrop-shaped hull with a distinctive ‘hump’ and large fin, although the stern resembles the earlier Song (Type 039)-class. However, it is believed that the S20 lacks many of the advanced features of the Type-039A, although CSIC stands ready to incorporate options should there be a request.

According to CSIC, the S20 platforms are fully indigenous designs that exploit the company’s experience from developing the Yuan-class submarines, which were first launched at its Wuchang Shipyard in Wuhan in May 2004. These are expected to cost between $500-600 million each, with associated technology transfer as well as the establishment of a submarine training centre at KSEW.

Meanwhile Turkey’s STM has been contracted to perform modernisation work on the Khalid-class submarines, with updates including a new periscope and optronic mast, as well as a SharpEye Doppler radar.