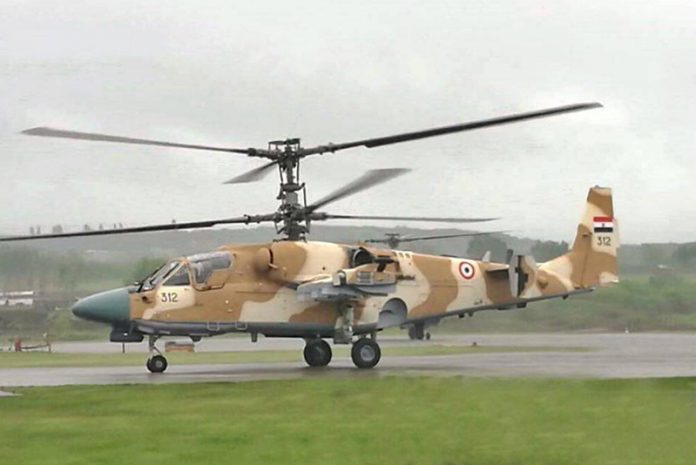 Egypt has announced that the Russian Helicopters Kamov Ka-52 ‘Nile Crocodile’ helicopter has officially entered service with the Egyptian Air Force. The announcement was made on 6 December 2018 during EDEX 2018 – Egypt’s first International Defense Expo.

The helicopter is an export derivative of the Ka-52 Alligator (known to NATO as the ‘Hokum-B’), or possibly of the navalised Ka-52K Katran (Mud Shark), which was designed to operate from the two French Mistral class amphibious assault ships ordered by Russia in 2010, though these vessels were subsequently embargoed in 2014 and sold to Egypt in 2015.

In 2015, Egypt signed a deal for the purchase of 46 Ka-52 helicopters for delivery between 2017 and 2020 – though Russian sources suggest that a requirement for Ka-52s to fly from the Mistral-class ships is additional. Pre-contract work is underway on the Ka-52K for Egypt, including finalisation of the helicopter’s “technical concept” and the financial conditions of the contract.

The Nile Crocodile name was apparently proposed by Dmitry Rogozin, then Russian Deputy Prime Minister in charge of the defence industry. It is not certain that the name has been officially adopted.

The Egyptian Ka-52 features updated avionics and a new cooling system and does have a reinforced fuselage structure and some corrosion resistant materials but lacks the folding rotor-blades and folding wing seen on the Ka-52K prototypes.

In September 2016, Egypt and Russia signed an agreement under which Egyptian pilots and ground crew would be trained on the Ka-52 in Russia. The first three aircraft were delivered from the Progress plant in Arsenyev in the Primorsk region of Russia in July 2017, with three more following in August. Nineteen had been delivered by the end of 2017. At least 12 of these were visible in satellite images of the airbase at Wadi al Jandali (Al Qatamiyah/Al Khatamia) home to the 550th Attack Helicopter Brigade, whose 51 Squadron flies the AH-64D Longbow Apache.