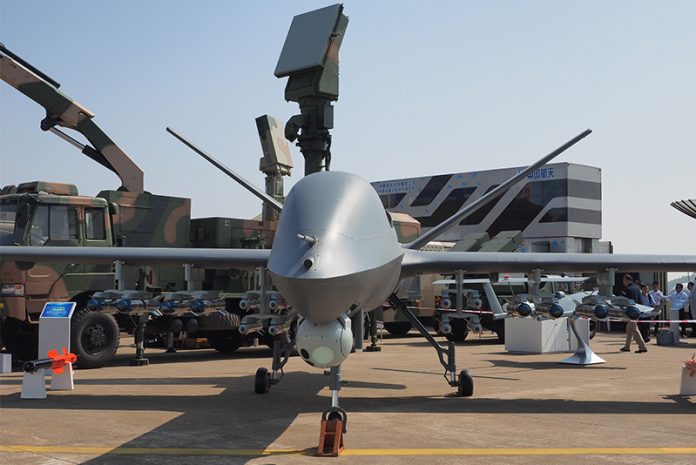 The service is already operating the tactical-class NESCOM Barruq, which appears to be a derivative of the China Aerospace Science and Technology Corporation (CASC)’s CH-3 design. However, PAF is understood to be seeking higher-end UAV capabilities, and has been linked to several Chinese-made UAVs.

Developed and manufactured by AVIC’s Chengdu Aircraft Design and Research Institute subsidiary, the Wing Loong I has a 14 metre wingspan and a maximum take-off weight of 1,200kg, and is presently in People’s Liberation Army Air Force (PLAAF) service as the Gongji-1.

The company has also developed the larger and more capable Wing Loong II, which has a 4,200kg MTOW with wingspan of 20.5m. CATIC states that the Wing Loong II has a stated internal payload capacity of 200kg, with provision for up to 480kg of external stores. A large fuel capacity enables it to fly for up to 20 hours. Likewise, the Wing Loong II has been acquired by the PLAAF, and serves under the name of Gongji-2.

Meanwhile Aerospace Long-March International Trade (ALIT) is marketing the internationally popular CH-4 UAV, which has a flight endurance between 14-30 hours depending on its configuration. The CH-4, which has a MTOW of up to 1,330kg and payload capacity of 345kg, has gained a respectable following around the world since its introduction in 2014, with at least 30 of these air vehicles now flying in countries such as Algeria, Iraq, and Jordan.

The company has also developed the larger and more capable CH-5, which was introduced in 2016 and subsequently fully developed in 2017. The air vehicle can carry a wide range of precision munitions, which would appeal to countries seeking an affordable and persistent airborne strike capability.