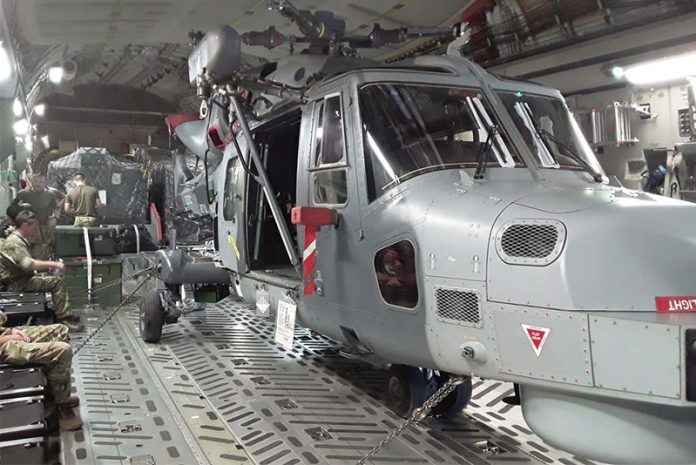 The last Royal Navy helicopter to fly on maritime security operations in Oman has returned to the UK after a ten-year mission.

As part of the operation, UK aircraft including Nimrod, Merlin and most recently Wildcat helicopters from 815 Naval Air Squadron have flown more than 17,000 hours on joint operations.

815 NAS will now redeploy Wildcat to support other operational tasking as they are no longer needed in Oman, having achieved huge successes against illicit smuggling and other criminal activity.

Chief of Joint Operations, Vice Admiral Ben Key, said: “I pay tribute to all those personnel who have contributed to the success of Operation Chobdahar. They have helped deliver security in the Gulf region, strengthened the UK-Oman relationship, and demonstrated the UK’s ability to deploy and sustain effective capabilities overseas.”

The Defence relationship between the UK and Oman dates back hundreds of years and is now strengthened further by the recent signing of the Joint Defence Agreement.

This will deliver new training, operational, and mutual security opportunities for years to come. Notable examples already this year include exercises in the Musandam Peninsular and on the new joint training area at Ras Madrakah, and the naval exercise Khanjar Hadd.

“The hundreds of men and women who have supported these operations over the last 10 years can be justifiably proud of their contribution to security in this vital part of the world.”

The Royal Air Force’s 902 Expeditionary Air Wing will continue to provide operational support in the Gulf region as they did during the hugely successful UK-Oman Exercise Saif Sareea 3 in 2018, alongside colleagues from the Royal Navy and Army.

The Royal Navy continues to have a significant presence in the Middle East, ensuring the security of some of the world’s most vital shipping lanes.

Warship HMS Montrose this month became the first Type 23 frigate to be stationed for three years at the UK’s naval support facility in Bahrain. She joins four of the Royal Navy’s fleet of minehunters to support peace and stability in the region.