Home Print Articles 2018 Myanmar’s Army – A law unto itself 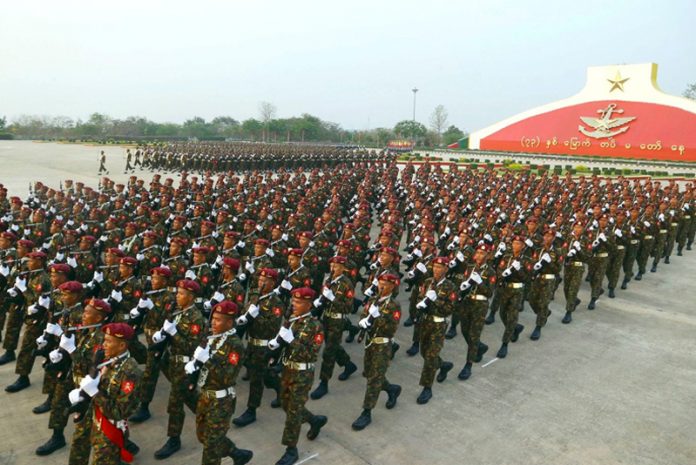 Anthony Davis – Since the explosion of the crisis in Myanmar’s Rakhine State in August last year, the Myanmar Army has become an international byword for some of the most savage atrocities inflicted on civilians in recent decades.

A series of meticulously researched reports from international human rights organisations and most recently a United Nations (UN) Fact Finding Mission have chronicled mass killings of Muslim Rohingyas, systematic gang rape and the torching of hundreds of villages that drove over 700,000 refugees across the border into neighboring Bangladesh.

This is hardly the first time the Myanmar military, or Tatmadaw, has faced international condemnation for rights abuses. It is though the first time a UN body has recommended the referral of top commanders including commander-in-chief Senior General Min Aung Hlaing to the Holland-based International Criminal Court (ICC) on charges of crimes against humanity and ‘genocidal intent’.

Myanmar is not a party to the Rome Statute that established the ICC and diplomatic top-cover extended by China and Russia in the UN Security Council which make it unlikely the officers named will be appearing any time soon in the Hague. But the Rakhine bloodbath does raise fundamental questions the ICC would need to address: how is it that the Tatmadaw – a well-organised and relatively modern state actor with a strong tradition of discipline and claims to military professionalism – has dragged its own reputation and that of Myanmar itself so low? Three central factors arguably account for a history of persistent abuse and periodic massacre which has culminated in the latest atrocities. Often overlooked by outsiders, the broadest of these is the manner in which Myanmar’s military has been exhausted and brutalised by war without end over seven decades since Independence in 1948. No other country’s army has been committed to unremitting combat operations for so long. In the case of Myanmar those operations have almost entirely been against domestic enemies where the line between combatant and civilian is perennially blurred.

The origins of the Tatmadaw date back to World War II and training from the Imperial Japanese Army, a force not noted for human rights. Its early post-Independence counter-insurgency campaigns were fought mostly in the ethnic Bamar heartlands of central Myanmar against communist and ethnic Karen rebels. From the 1970s the focus shifted to the mountains and jungles around the nation’s rugged borderlands where an array of ethnic minority pocket-armies – fought for autonomy from central military rule.

These were ‘small wars’ conducted by ill-equipped light infantry battalions operating in remote regions with only occasional artillery support, and at the end of ‘shoe-string’ logistics lines reliant mainly on humans and pack animals. Casualty evacuation was rare and the strain on morale a constant challenge.

Despite modernisation of equipment and increasing air support, sharply escalating fighting in northern Myanmar since 2014 has only exacerbated front-line problems of high casualties, extended rotations and low morale.

The Tatmadaw’s reputational crisis has also been driven by a deep-rooted ethnic chauvinism. The army is overwhelming recruited from among the country’s majority Buddhist Bamar community (68 percent of a population of 52 million) and is led by an almost exclusively Bamar officer corps. Essentially, colonial pacification campaigns targeted on minority insurgents and their civilian support bases have been infused with a powerful sense of Bamar cultural, linguistic and ethnic superiority which predictably has bred contempt and abuse.

Operations against Karen, Shan and Kachin insurgents have involved well-documented recourse to the burning of villages, rape of women and the forced recruitment of men as porters and human mine-sweepers. But the worst of the army’s racist animus has undoubtedly been reserved for the Rohingya – systematically dehumanised both as Muslims and ‘Bengali’ interlopers with no claim on citizenship rights.

Finally, the Tatmadaw has developed an unwavering sense of its own indispensability as the custodian of Myanmar’s territorial integrity and national destiny. Since the coup of 1962 when it first seized control of government, the military has existed as a caste apart, contemptuous of politicians, dismissive of minorities and jealous of its own economic and social prerogatives. Behind a fig-leaf of elections and quasi-civilian rule, the military-scripted constitution of 2008 ensures it an indefinite lock-grip on real power in Myanmar.

Predictably political power and social privilege have fostered a pervasive culture of impunity on the battlefield and beyond. As demonstrated during the ruthless crushing of pro-democracy protests in 1988 and 2007, the army has not hesitated to turn its guns on ethnic Bamar civilians. The violence visited on the Rohingya has been unprecedented in its scale and savagery but it emerges from institutional reflexes ingrained over decades.

Note: Anthony Davis is security analyst and consultant specialising in insurgency, terrorism and military affairs in the Asia-Pacific region.