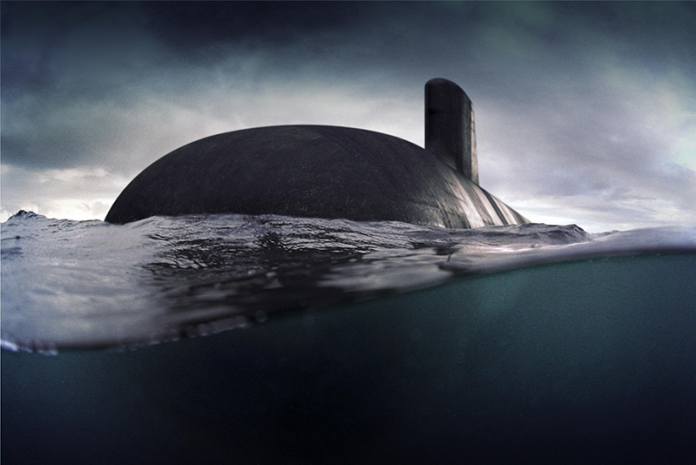 Tim Fish – The population growth of submarines in Asian-Pacific waters is outstripping the region’s capacity to produce them.

The trend towards the acquisition of submarines in the Asia-Pacific region is gathering pace as more countries join the race. Maritime industry representatives attribute this submarine arms race to the growth of China and the rapid expansion of the People’s Liberation Army Navy (PLAN) sub-surface capability across both nuclear-powered and conventionally powered submarines.

The PLAN’s nuclear-powered submarine classes are still largely developmental but with its Jin-class (Type 094) ballistic missile submarines (SSBNs) it has a medium range capability and is embarking on a new Type 096 SSBN project that will upgrade its sea-based deterrent further. The Shang-class (Type 093) and earlier Han-class (Type 091) attack submarines (SSNs) are based on Russian designs and are reputed to be rather noisy, however the latest Type 095 being built is intended to be much quieter.

For hunter-killer submarines (SSKs) there is a similar story. The early Ming-class (Type 035) submarines delivered unsatisfactory performance and the PLAN ended up buying a large number of Russian Kilo-class boats to supplement its force. But the newer Song-class (Type 039) have more enhanced features and up to 13 hulls are rumoured to be in existence. The most recent is the Yuan-class (Type 39A/Type 041) which appears to have been developed from the Kilo-class but are far more effective than their predecessors and are another step up in capability with over 17 in service.

Reducing target echo strength is a key development in all submarines across the Asia-Pacific region with the use of more internal mountings for machinery and new materials for the outside of the hull. A further development for SSKs is energy storage where new Li-ion batteries will bring significant enhancements in power usage and will complement the introduction of air-independent propulsion (AIP) systems. AIP allows conventional submarines to engage in longer submerged missions.

Despite the expansion of the PLAN fleet, other nations including India, Japan and South Korea are looking to their own industries to support larger submarine fleets. However, the response in southest Asian countries will be limited due to constrained budgets and the ability to provide crews and maintenance for the boats. 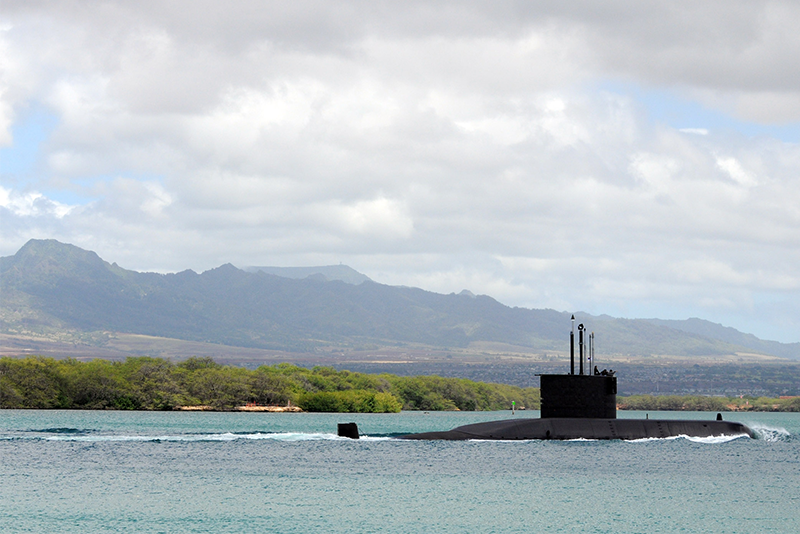 The Philippine Navy (PN) has been training personnel for submarine operations since it released a Request for Information (RfI) in December 2016. It is explicated that this will have appealed to European submarine yards such as France’s Naval Group, Germany’s Thyssenkrupp Marines Systems (TKMS), Sweden’s Saab Kockums along with South Korea’s Daewoo Shipbuilding and Marine Engineering (DSME) and Russia’s Rosboronexport.

Horizon 2 will run from 2018-22 and the delivery of a first boat is expected in 2025 but questions have arisen about whether the PN will be able to operate and support submarines without dedicated facilities or any existing anti-submarine warfare assets. It would be a considerable leap forward and the Philippines has more pressing maritime security requirements with its surface fleet.

Current designs that the PN may consider include the Scorpene variant from Naval Group, a Type 209, 210 or 212 from TKMS, a variant of the Chang Bogo class from DSME and a Kilo-class project 636 from Russia. But Duterte’s drive for submarines looks to be more about prestige than building an actual capability. It appears that he is merely copying rivals in the region and it will be interesting to see if the PN can sustain an SSK capability.

Thailand is another country that is developing a new underwater capability with the selection of China’s S26T design, a 2,600 tonne export variant of the Type 041 Yuan-class boat. A single boat was ordered for the Royal Thai Navy (RTN) in May 2017 under a $410 million contract and will be built by China Shipbuilding and Offshore International Company (CSOC). Steel was cut in September this year with delivery expected from 2023. A further two boats will be ordered separately.

The S26 has also been ordered by Pakistan, which has a requirement for eight new boats. Bangladesh is also buying two second hand Type 035G Ming-class boats from China.

Indonesia selected the DSME Chang Bogo Type 209/1400 design for its submarine programme in 2011 under a $1.1 billion contract for three submarines. It received the first, named KRI Nagapasa, in August 2017, with the second boat, KRI Ardadedali delivered in April. The third is to be built by Indonesian shipbuilder PT Pal under a technology transfer arrangement. DSME has also secured a $27 million contract to upgrade the Indonesian Navy’s (Tentara Nasional Indonesia-Angkatan Laut – TNI-AL) existing two Cakra-class Type 209/1300 boats that TKMS delivered in 1981.

In South Korea, DSME is building a third series of Chang Bogo-class submarines for the Republic of Korean Navy (ROKN) to its own KSS III design. Ki Seong Hong, deputy general manager of DSME’s Navy and Special Ship division told AMR that there will be three boats in the initial batch of Chang Bogo III submarines. “DSME designed the KSS III; we launched the first boat in September and are constructing the second boat with a plan to launch in 2020,’ he said.

Rival South Korean shipbuilding Hyundai Heavy Industries (HHI) is building the third of class. Hong said that the second batch of KSS III boats will start with the fourth boat, and could go to an additional three or even six boats in total.

Neighbouring Japan is also retaining more of its older SSKs in service to provide an expansion to its sub-surface fleet. The Japan Maritime Self Defense Force (JMSDF) has been able to support a large force of 16-18 submarines for some time on a rolling programme of annual construction but now aims to grow this to 22 boats within the next few years.

It announced in February this year that it was upgrading seven of the 11 of its older class of Oyashio-class submarines to the standard of the newer class of Souryu-class submarines, of which 11 have been built out of an expected 14 boats. Like South Korea, Japan has split production of its submarines between two suppliers: Mitsubishi Heavy Industries and Kawasaki Heavy Industries, however Japanese industry has not been as successful on the export market. Although it is engaged in the Indian P-75I submarine programme and Taiwan’s submarine programme it failed to secure the Australian SEA1000 Future Submarine programme despite being touted as a preferred option.

The $36 billion (AUD$50 bn) programme for 12 boats was won by Naval Group in 2016 with its offer of the Shortfin Barracuda 1A design – a conventionally powered variant of the company’s Barracuda design that is being used for the French Navy’s Suffren-class SSN. However, despite the signing of a design and mobilisation contract the programme is rumoured to be in trouble due to a breakdown in relations between the company and the Australian government and the failure to sign a strategic partnership agreement to allow the programme to progress.

Naval Group director of communications, Arnaud Genin, told AMR that despite news reports of a delay the programme “is on track” with 100 personnel from the company in Australia and 350 Australian personnel in France at sites in Cherbourg, Toulon and Nantes.

He said that Naval Group is delivering the solution but the design is not yet finalised. Genin explained that there needs to be a visibility study, followed by the basic design stage and then the detailed design stage – a process that can take up to seven years. He added that Naval Group and the Australian government are about to reach a milestone on the visibility study and are training the Australian team that will become responsible for that design.

Genin added that a design and mobilisation contract would be signed by the end of the year and that a Strategic Partnership Agreement would cover relations for around 50 years. He added that it did not help that “political instability” in Australia has affected the progress of negotiations, but that the construction of the new shipyard at ASC North in Osborne near Adelaide in South Australia would begin within the next few months. 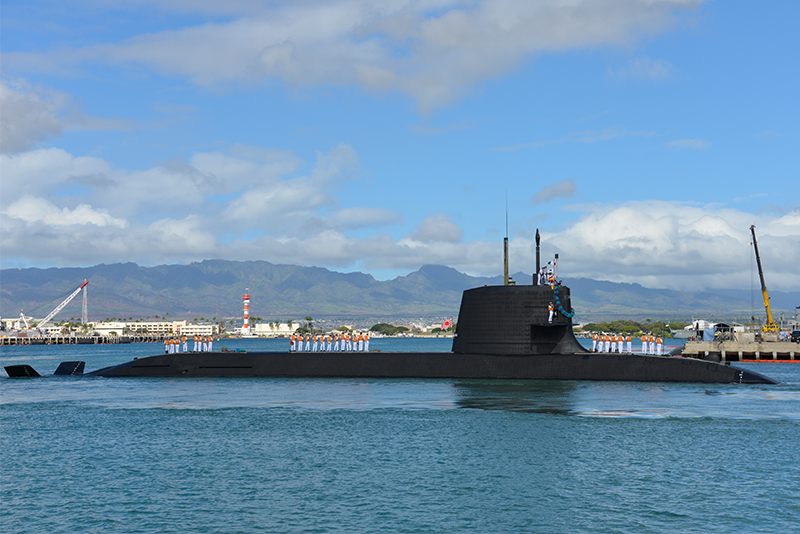 Naval Group is also engaged in the P-75 Kalvari-class submarine programme in India that aims to deliver six Scorpene class submarines in partnerships with Indian shipbuilder Mazagon Docks Limited (MDL). The programme has experienced considerable delays but the first boat, INS Kalvari, was finally commissioned in November 2017 and has undertaken operations with the Indian Navy. The second boat is undergoing the final stages of sea trials and will be commissioned by the end of 2018. Future plans are to deliver the remaining four boats on an annual drumbeat from 2019-2023.

The delays are blamed on the lack of experience of MDL, which had lost skills it had developed in the 1980s with TKMS when it delivered the Shishuma-class of submarines. This meant that Naval Group had to help restart skills training from 2004-05 when the P-75 programme started. India still has a requirement for 24 SSKs and after the first Kalvari-class boats have been delivered it is expected that a follow-on class of six P-75I boats will follow. It is unclear if the Indian government will stay with Naval Group or choose a different design supplier, or even if it will continue with MDL as the domestic builder.

With all the submarine programmes underway there are projected numbers for over 300 submarines to be in-service with Asia-Pacific countries over the next few decades, a massive increase on the existing inventories. This could create considerable security challenges later this century as navies increasingly rely on submarines to preserve their maritime security in a more congested environment.