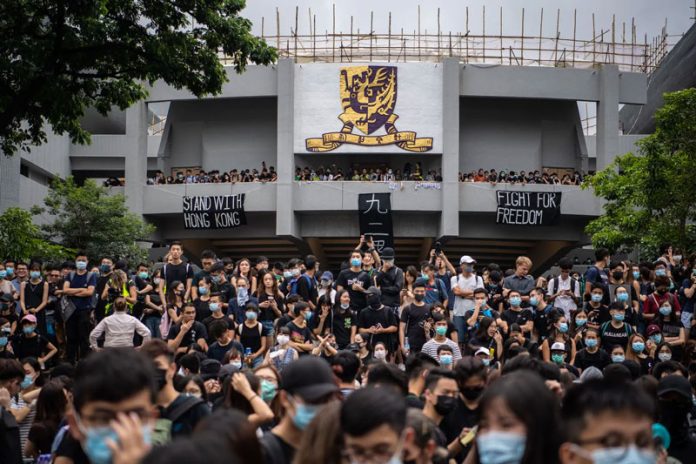 The extensive protests by the people of Hong Kong reveal a deep concern about the increasing rate at which the Chinese government is taking control of all aspects of the territory.

China is not waiting to see out the terms laid down in the handover of Hong Kong agreement between the British and Chinese governments that came into effect at midnight on 1 July 1997.

The “high degree of autonomy” laid down in the agreement was supposed to last for 50 years up to 2047 – based on a “one country, two systems” principle. However, the Chinese government has continually demonstrated its intolerance to anything other than a single nation run by Beijing. Changes are being made continually with the Hong Kong government being reshaped to increasingly include pro-Beijing members who are not elected by the population.

While the UK’s Minister of State for the Foreign Office, Sir Alan Duncan, recently announced that the UK was “fully committed to upholding Hong Kong’s high degree of autonomy and rights and freedoms under the one country, two systems principle; which is guaranteed by the legally binding joint declaration of 1984,” there is virtually nothing that can be done. With the UK undergoing a change of leadership and a potential no deal Brexit looming in October, Britain is hardly likely to jeopardise its economic relationship with Beijing by applying any measure remotely effective or painful to Beijing.

The subjugation of the Xinjiang Uyghur Autonomous Region and Tibet have provided enough evidence that any form of independence within China and its territories is not tolerated. News of Uyghur muslims forced into re-education camps where they are effectively prisoners are regularly covered by the world’s media, and the erosion of Tibet’s identity including the persecution of Buddhist by the authorities who view them as a threat to overall national security may cause outrange – but little else.

It is little wonder that Taiwan continues to discount out of hand Chinese ‘assurances’ regarding the future independence of its government under Chinese rule. During his speech on 2 January this year to mark the 40th anniversary of the 1979 ‘Message to compatriots in Taiwan’, President Xi Jinping referred to Taiwan once again being part of the mainland although under Beijing’s concept of ‘one country, two systems’. Casting eyes over to the seemingly inevitable fate of Hong Kong, who were given the same guarantee, the offer has never been less appealing than it is now.

by Andrew Drwiega (Editor in Chief)