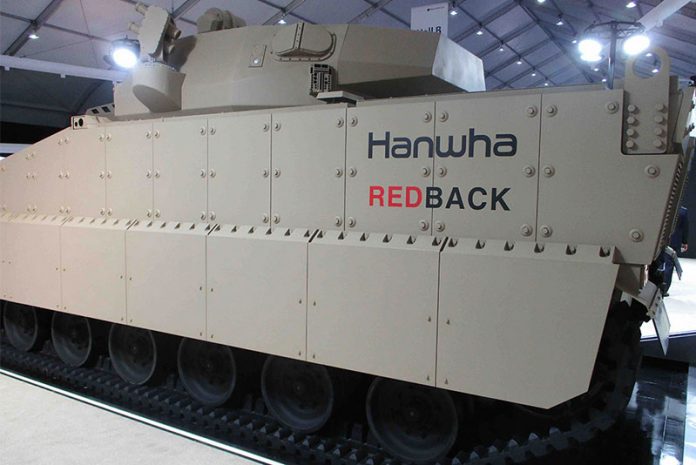 At a ceremony this morning in the South Korean capital, the country’s Prime Minister Lee Nak-yeon watched the unveiling of Hanwha’s 42-tonne next generation Infantry Fighting Vehicle, the Redback.

Built by industrial giant Hanwha, the Redback has been shortlisted for the Army’s $15 billion competition for around 450 vehicles, which will replace Vietnam era M113 armoured personnel carriers. The other contender is the Rheinmetall Lynx.

The first vehicle was completed about one month ago and has now been shown in public for the first time after a series of company maneuverability trials. This IFV plus another two will be shipped to Australia in one year from now for further tests to be conducted by the Army and the Defence Science and Technology Group for the phase of the competition known as the Risk Mitigation Activity.

‘Redback’ is different from other IFVs for several reasons, including the use of rubber tracks and independent suspension, said to make it 70% less susceptible to the shocks and vibration involved in cross country travel. If selected, Hanwha proposes to build all 450 vehicles in Australia and could use that facility, planned for Geelong, to export to other customers – including the Army of South Korea itself, which is also looking for a new generation IFV.

The South Korean requirement is very similar to Australia’s – and hence the interest of the Prime Minister in the unveiling ceremony today. At the moment, the RoK is running about a year behind the Australian program, but now there is talk – informal so far – of trying to speed up the Korean procurement so that it meshes with Canberra’s timetable.

The only major difference between the vehicle unveiled and the final version is the turret.  The one on display comes from Israeli company Elbit; the one for Australia will have a turret made by EOS, based on the Elbit design.