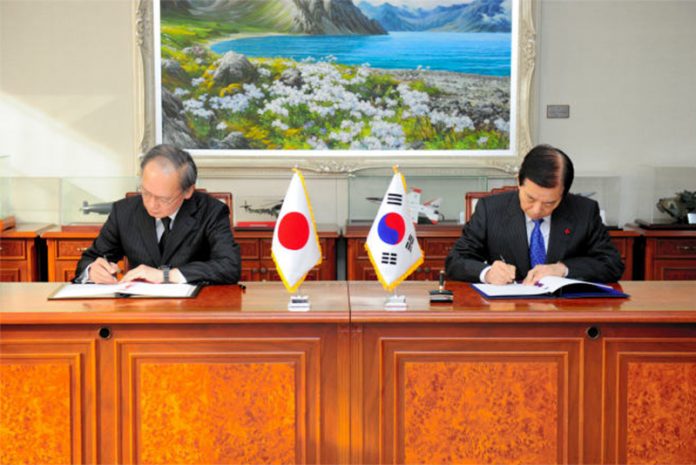 The spiral downwards in relations between the Republic of Korea (RoK) and Japan is worrying from a regional security viewpoint, especially the decision in August made by the Korean government to stop sharing intelligence with Japan.

With America’s eye distracted by the impeachment investigation against President Trump, and indeed Trump’s lack of strategy regarding North Korean leader Kim Jong-un following his initial meetings and handshakes, South Korea’s decision not to share intelligence through the General Security of Military Information Agreement (GSOMIA) must be very pleasing to both Kim Jong-un and China’s President Xi Jinping.

Any wedge between countries that adhere to the ‘under threat’ rules-based international order benefits those countries who seek to dismantle it and replace it with their own predominance, exactly what China (and Russia) are seeking to do.

The bad blood between Koreans in general and Japan goes back to the very serious humanitarian issues resulting from the Second World War and Japan’s occupation of the Korean Peninsula. While this is not going to be resolved any time soon, the security threats posed by Chinese expansionist ambitions regionally and increasingly further afield, North Korea’s belligerence by continuing missile testing following Kim’s meetings with Trump, would suggest that stopping intelligence sharing will benefit neither side.

Having both signed up to the GSOMIA agreement in November 2016, then renewed again in November 2017, South Korea’s move to withdraw intelligence sharing could be read as sending a not so subliminal message to Washington to re-engage in a more committed way to the problem of its northern neighbour and to act as moderator on an equal basis over its dispute with Japan.

The interception earlier this year by Republic of Korea Air Force (ROKAF) F-15 and F-16 fighters of Russian and Chinese aircraft, at least one of which had entered the air defence identification zone near the disputed Dokdo islands (also known as the Liancourt Rocks and Takeshima to Japan) in the Sea of Japan, should be more than enough evidence that countries in that region need to be working closer together, rather than pushing each other away. The fact that the ROKAF aircraft fired around 360 shots and released flares around the Russian Beriev A-50 (NATO – Mainstay) airborne early warning and control (AEW&C) aircraft was exploited by Japan’s Chief Cabinet Secretary Yoshihide Suga who called the action ‘totally unacceptable and extremely regrettable’.

Not sharing intelligence is a step too far in a region that is edging closer to a serious military engagement if cooler heads do not prevail.