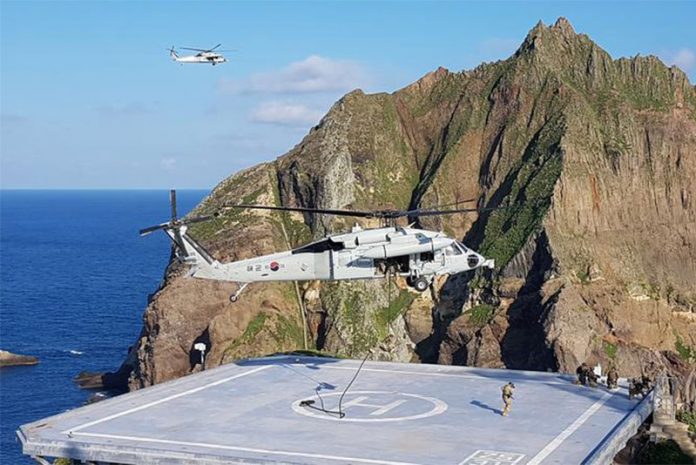 The strategic importance of military bases on remote islands has been brought sharply into focus over the last few years by China’s well documented island building programme in the South China Sea, focusing particularly on Fiery Cross Reef, Mischief Reef and Subi Reef, all located in the Spratly Islands.

China’s claim to have opened up a maritime rescue centre at the beginning of the year to “offer better support to maritime rescue operations in the southern part of the South China Sea”, was considered by most to be, at best, another thin justification for militarising the island which, according to the Washington DC-based Centre for Strategic and International Studies’ Asia Maritime Transparency Initiative (AMTI), has even got close-in weapons systems installed.

Runways are one of the key factors here, not only for resupply and maritime patrol but also for military strength and the ability to enforce the nation’s will politically as well as geographically.

The Chinese have runways on all three of their Spratly Island bases. In terms of runway length, the longest and most able to accept a wide variety of aircraft types, including fast combat jets, is the 3,125 metre runway on Fiery Cross Reef. There is also another shorter runway on Woody Island located in the Paracel Islands. China took possession of this island in 1955 which became one of its first well established bases. There have been visits from fighter aircraft and a Shenyang J-11 fighter was spotted there in March 2017.

The other nations tussling for island sovereignty in the South China Sea include Vietnam, Malaysia, the Philippines and Taiwan, all of which have their own runways but none have the length and capacity of the airfield at Fiery Cross or even Woody Island.

Vietnam has been working on its rebuilding an airfield on Big Spratly although this is only 1,300m long. The Vietnamese have completed hanger facilities which the ATMI reports will probably house its PXL maritime patrol aircraft.

In 2003, Malaysia modernised its 1,360m airstrip on Swallow Reef, representing the second largest runway among the islands. A third of the length of the Chinese runway, this operates mainly as a civilian airport although some types of military aircraft could use it if needed.

Taiwan’s 1,200m runway on Taiping Island (also known as Itu Aba) has been bolstered by the rebuilding of port facilities. For military use only, it can operate Lockheed Martin C-130 flights and is protected by a small quantity of coastal defences.

The Philippines has perhaps the least prepared landing strip, as it has remained rough and unpaved since its construction. Again, around 1,300m in length, it can be used by the ubiquitous C-130 military transport.

The real utility of China’s remote island bases, particularly those with a long runway, gives longer reach for power projection. The western Pacific (long the domain of the US Navy) and south to the Indonesian archipelago are within reach, not to mention the Gulf of Thailand and out to the Bay of Bengal for long range aircraft. Just remember what the United States benefits from having its own base in the Indian Ocean.

by Andrew Drwiega (Editor in Chief)