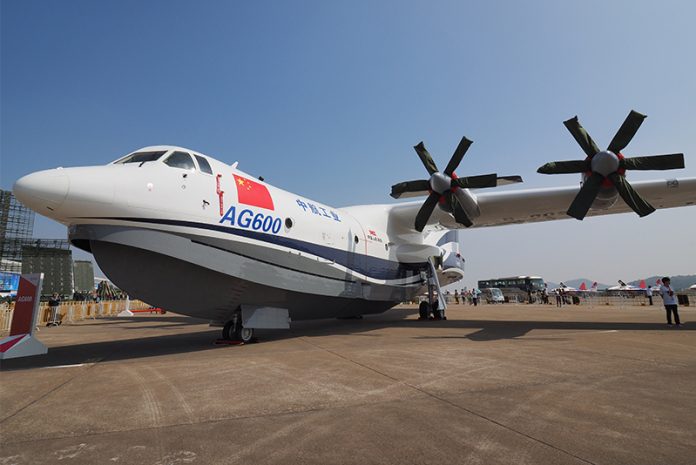 The state-owned Aviation Industry Corporation of China (AVIC) has completed flight tests of its indigenously developed AG600 large amphibious aircraft over the sea, the company announced on 14 April.

The latest milestone marks a major step forward in the AG600’s development before its first maritime surface take-off and landing planned for the end of 2020 in Hubei province, and in spite of the deleterious effects of the Covid-19 coronavirus on China’s aviation industry.

The aircraft, also known as Kunlong (Water Dragon), previously performed its land-based maiden flight in Zhuhai, South China’s Guangdong Province, in December 2017 and its first water-based take-off and landing in a reservoir in Jingmen in October 2018.

According to local reports, the AG600 is also set to become the world’s largest amphibious aircraft with a 38.8 metre wingspan and 37m long fuselage, with a maximum take-off weight (MTOW) of 53.3 tonnes and a maximum endurance and range of 12 hours and 4,500km respectively.

The aircraft is reportedly powered by four WJ-6 turboprop engines, which are derivatives of the Motor Sich Ivchenko AI-20) that enable it to cruise at speeds of 270 knots (500km/h).

It is understood to be the third large aircraft designed and manufactured locally following the Y-20 military transport aircraft, which entered service in 2016, and the 190-seat C-919 commercial passenger aircraft, which made its maiden flight in July 2017.

Reports also indicate that the AG600 is presently undergoing further fine-tuning and design optimisation work in Jingmen, Hubei, while crew members familiarise themselves with the airspace and marine environment for the upcoming maritime test flights.

The aircraft is expected to be delivered by 2022, with initial roles comprising firefighting, search and rescue (SAR), and maritime patrol.

Observers also note that that the AG600 can reach any location in the South China Sea when deployed from the southern city of Sanya in Hainan province, making it especially suitable for logistics and personnel transport to China’s disputed artificial islands.