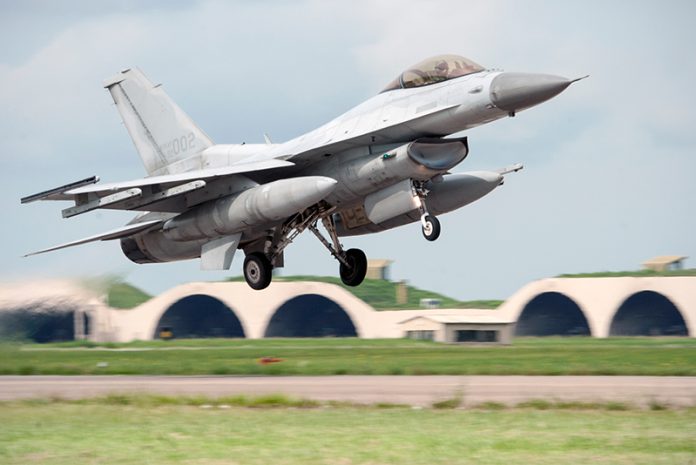 The US Defense Security Cooperation Agency (DSCA) announced on 30 March that the State Department had approved the sale of Mode 5 IFF and Link 16 Tactical Datalink (TDL) for the RoKAF’s F-16 Block 32 aircraft worth an estimated $194 million. The sale also includes associated equipment, training, and logistical support.

The DSCA stated that the proposed sale will improve the RoKAF’s interoperability with US Air Force (USAF) and other coalition forces through an enhanced datalink and Mode 5 IFF, resulting in “a more effective alliance for its F-16 fleet”.

The latest upgrades add to an ongoing modernisation effort being implemented across the service’s KF-16 fleet by Lockheed Martin, which was awarded a $1.2 billion contract in late 2016 to install new capabilities such as an active electronically scanned array (AESA) radar, the Joint Helmet Mounted Cueing System II (JHMCS II) helmet-mounted display, as well as modern avionics systems such as a large-format, high-resolution centre pedestal display and a high-volume and high-speed databus.

Upgrade work is expected to be completed by 15 November 2025.

The RoKAF had also earlier upgraded some of its KF-16s under the $250 million Peace Bridge Upgrade (PBU) programme, which was also completed around late 2016. This effort expanded the range of weapons that the aircraft could deploy including the AIM-120-7C Advanced Medium-Range Air-to-Air Missile (AMRAAM) and the GBU-31 Joint Direct Attack Munition (JDAM).

South Korea is also looking to expand its stocks of AMRAAM missiles, with the US government approving a possible FMS of up to 120 AIM-120C-7/C-8 AMRAAMs with associated support for an estimated cost of $253 million in October 2019.

“This proposed sale will improve the ROK capability to meet current and future threats by increasing its stocks of medium range missiles for its F-15K, KF-16, and F-35 fleets for its national defence,” the DSCA announced.