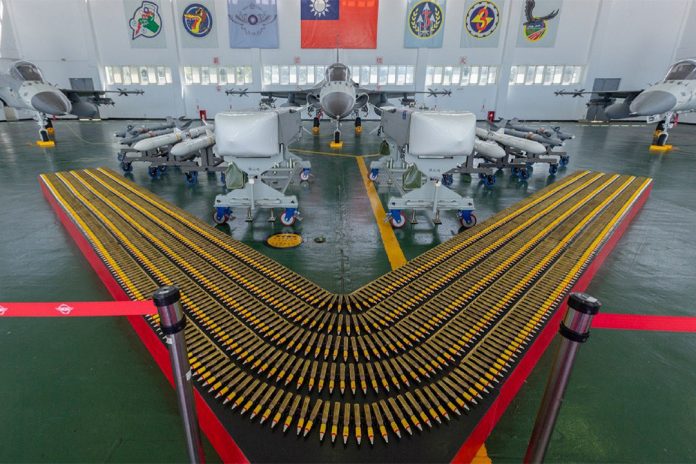 The Republic of China Air Force (RoCAF) took the opportunity to highlight its indigenously developed Wan Chien air-launched land attack cruise missile during an official visit by Taiwan’s president Tsai Ing-weng to Makung Air Force Base (AFB) on the Penghu Archipelago on 22 September.

The Wan Chien – which means ‘ten thousand swords’ – entered service in 2018 and is reportedly capable of threatening land-based targets at ranges of between 200 and 250 km using its turbofan propulsion and GPS/INS guidance. It is physically comparable to the  US-made AGM-154 Joint Stand Off Weapon (JSOW) and Swedish-German Taurus KEPD 350 (Kinetic Energy Penetration Destroyer), although the Taiwanese weapon is understood to be capable of accommodating a range of warheads including high-explosive, semi-armour piercing, or submunitions.

The weapon is developed and manufactured by the state-owned National Chung Shan Institute of Science and Technology (NCSIST), and is part of a wide-ranging US$ 587 million, two-stage mid-life upgrade for the F-CK-1 IDS fighter fleet, which was launched in 2009.

The development comes amid growing tensions with Beijing, the which opposes the closer ties and military sales between Washington and Taipei and has been gradually increasing both the scope and scale of People’s Liberation Army (PLA) exercises and operations around the island in a show of force aimed at deterring Taiwanese independence. China regards Taiwan as a wayward province and has repeatedly asserted it will be reunited with the mainland whether through peaceful means or otherwise.

The incursions prompted the MND to launch RoCAF interceptors and activate its radar and air defence systems as a precaution.

In what appears to be further signalling against Beijing, Taiwan conducted a two-day test firing of surface-to-air missiles off its eastern and southern coasts on 24 September. The type was not disclosed, but is believed to be the latest long-range Tien Kung-3 (Sky Bow 3) system also developed by NCSIST.