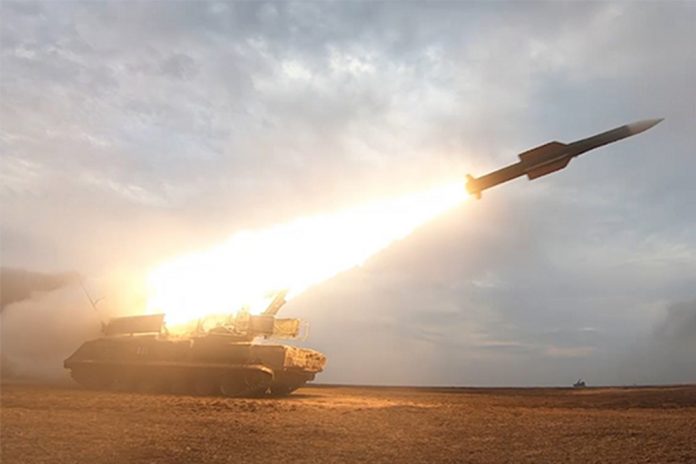 The testing resulting in destroying all the designated targets took place during the large-scale army air defense drills in the South of Russia. Aside from TOR-M2 and Buk-M3 systems the ADMS grouping included S-300V4 long-range air defense systems and Verba MANPADS crews.

“At the first stage of the exercise, the S-300V4 long-range anti-aircraft missile system battalions repelled the strike of aeroballistic missiles, carrying out combat launches at targets descending from an altitude of more than 200 km. At the second stage, combat crews of Buk-M3 medium-range air defense systems and Tor-M2 short-range anti-aircraft missile systems battalions, after performing combat missile launches, repelled the attack of the simulated enemy cruise missiles flying at altitudes less than 10 meters. Buk-M3 hit targets at a distance of up to 40 km, while Tor-M2 divisions, in turn, performed combat launches at air targets at a distance of up to 15 km”, – said the MoD.

The ministry adds, that ‘for the first time at the training ground centralized combat work was carried out to fire at the groups of targets of various types, while the strike with different air attack weapons was carried out simultaneously’.

All the systems used during the massive drills have their export modifcations, that are actively promoted at the global market by Rosoboronexport, the Russian state intermediary for military and dual-use exports and imports, that marks its 20th anniversary on November 4th this year. The systems were showcased at the ARMY 2020 Expo in Russia in August.

The export modification of S-300V4 ADMS called Antey-4000 was unveiled for the first time at ARMY Expo. According to its developer Almaz Antey, thanks to the modernization of ground-based equipment and on-board missile equipment, the new system significantly surpasses its predecessor the Antey-2500 in terms of range, altitude and speed of interception of the aerodynamic targets.

Buk-M3 is marketed globally as the Viking. In comparison with the earlier version, its range has increased nearly by 1.5 times – up to 65 kilometers. Besides, the number of simultaneously engaged targets has increased by 1.5 times. The system, according to the manufacturer, is capable of engaging not only aerial but also ground and surface targets.

In 2018 Russia announced the launching at the global market of TOR-E2 ADMS. As the Rosoboronexport’s Director General Alexander Mikheev pointed out at that time, it surpassed most of its market counterparts in terms of ‘unique combat capabilities and technical characteristics’.

The air defense systems form a significant part of the overall Russian military export. As Mr. Mikheev pointed out earlier in Independent Military Review interview, the increase in the Rosboronexport’s portfolio’s share of air defense weapons was due to such landmark contracts as those for the supply of S-400 Triumph long-range anti-aircraft missile system and other systems.

Recently in Asia TOR, Buk and Viking air defense systems were presented by Russia at Indo Defence expo in Jakarta (Indonesia) and at Airshow China in Zhuhai (PRC).

Rosoboronexport was established on the 4th November 2000 by a decree of the Russian President Vladimir Putin. It is the Russian state intermediary for the exports and imports of the entire range of products, technologies and services of military and dual use.