This week the lead picture belongs with the first story, which examines how the US Navy and US Marine Corps are looking to network not only closer with each other, but how this can be expanded into the joint force to ultimately move towards ‘any sensor, any shooter’.

A NATO exercise that has grown in significance is its annual Very High Readiness Force deployment, this time into Lithuania. Demonstrating not only the ability, but the intent, is always a useful reminder for potential adversaries.

And talking of sending the right message, the US and China have just put in place a Working Group to hopefully snuff out tension through assured, direct communications. Let’s hope this working group doesn’t rely on too many powerpoints or concentrations could wane!

US NAVY AND MARINES LOOK BEYOND NAVAL INTEGRATED TOWARDS JOINT FORCE

“If you look at intelligence, if you look at the threat, if you look at budgets that will be flat or declining, there really is only one way you can go – a truly integrated naval force in support of the joint force,” stated Lieutenant General (LtGen) Eric M. Smith, US Marine Corps, Commander, Marine Corps Combat Development Command.

LtGen Smith joined Vice Admiral (VAdm)James W. Kilby, US Navy, deputy chief of Naval Operations for Warfighting Requirements and Capabilities, for a discussion on The Movement Toward Greater Integration in Naval Warfare, hosted by the Centre for Strategic and International Studies (CSIS) and the US Naval Institute (USNI) on 29 October, 2020.

“Our contribution could be sensing and reporting back to the naval and joint forces. We will inflict lethal effects, but our greatest contribution may be in the ability to sense and detect and cause effects through those capabilities, stated LtGen Smith.

Addressing the challenge of getting networks right between commands, VAdm Kilby said that Project Overmatch was a look at the naval tactical grid and analysing whether it was still compatible with the joint force and with the army, or whether new decisions could drive a better integration. He said the project was considering latency and whether the ‘demand signals’ were aligned in its development.

“There will always be some slight difference between services as we go towards joint all domain control – any sensor, any shooter. The army has modified that to any sensor, best shooter,” said LtGen Smith. Qualifying that he added, “what is the data required to produce target qualified information – the form factor will change whether its on a ship or the back of a soldier.” The goal was to minimise the differences and look into why data transfer cannot be the same across the joint enterprise.

On the question of securing industry buy-in to what would be required, VAdm Kilby pointed to a series of Advanced Naval Tactical Exercises ANTAC), which invited industry to solve particular problems defined by the Navy.

“With the USMC, we produced a definition for the attributes of a naval tactical grid, including looking at the resiliency and how it would be open to other services and build into the future,” explained VAdm Kilby. So collecting multiple programme requirements together, such as Navy Integrated Fire Control – Counter Air (NIFC-CA) is a great capability, “but there are four independent programmes from the sea pillar that align to create that.” He added that industry was needed to help bring programmes of record together but added that “the normal ebb and flow of the Pentagon is that the programme of record views all new starts as competitors.”

Giving a ‘heads-up’ on the kind of wider technology that USMA.USN integration was looking to acquire, LtGen Smith pointed to areas including “low probability of intercept and detection, low signature management, long duration, and range.” But he warned, when you come to the industry exercise if you bring stuff that we asked for you go into the VIP Tent 1, if you don’t you go into Tent 2 which is somewhere down the road near the port-a-johns. We need you to bring what we are asking for.” 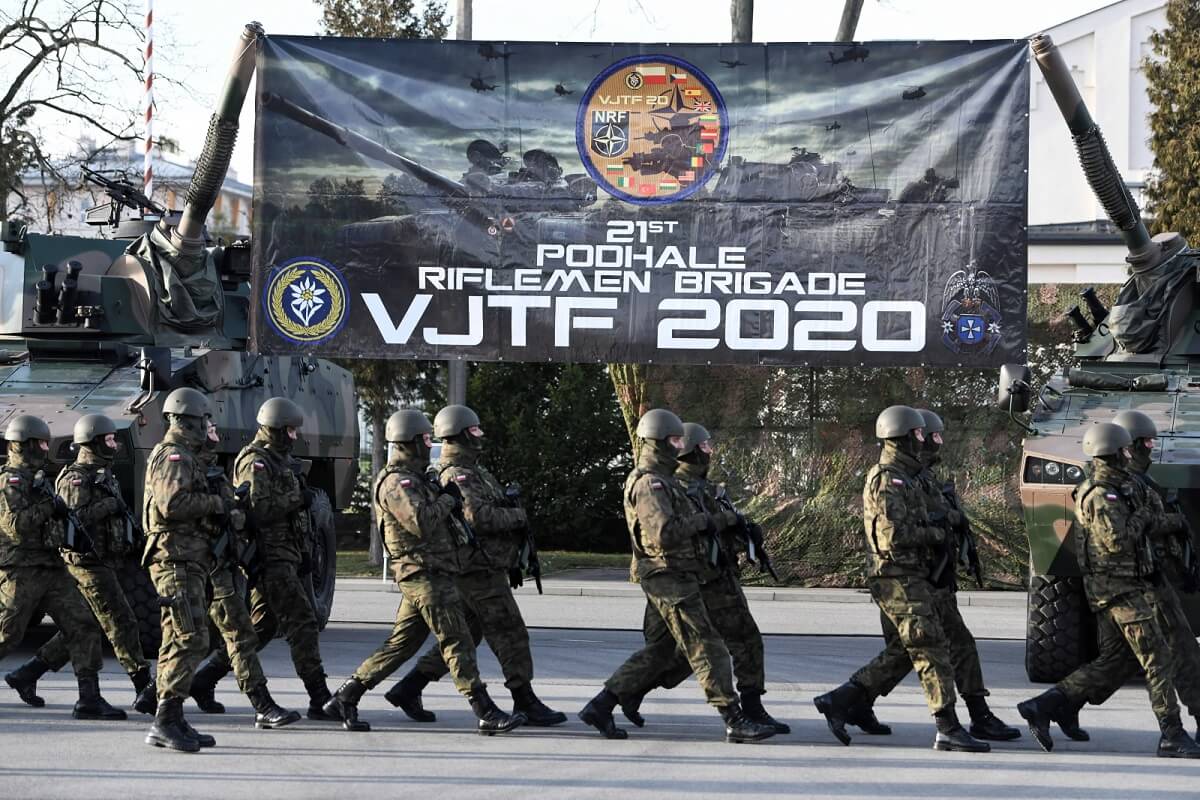 Brilliant Jump II 2020 has two parts: the first maritime phase lasts from 28 September to 2 October and is primarily maritime. The second is the land deployment phase from 28 October to 6 November.

The land phase will comprise 2,500 troops and around 600 vehicles of NATO’s VJTF. They will deploy using land, sea and air means to rush into the country and deploy. Once there they will stay to participate in Lithuania’s Iron Wolf exercise before returning to their home bases.

NATO members rotate their leadership of this Task Force, which can call on between 5,000-8,000 soldiers. According to a NATO statement, “The core of this year’s land high reaction force is Poland’s 21st Podhale Riflemen Brigade, supported by units from the country’s 12th Mechanised Division, the 3rd Transport Aviation Wing, military police, as well as logistics experts and counter-chemical, biological, radiological and nuclear specialists. Additional support will be provided by Spanish and Czech units.”

Over 28 & 29 October, United States and Chinese defence officials held their first Crisis Communications Working Group via a videoconference. The aim is to create a communications channel that can be used during any future crisis, as well as to maintain regular communications to potentially break and halt any crisis from fully developing.

Tension has been steadily rising not least over the Chinese move to dominate the South China Sea through its island building programme, as well as concerns from Japan about China’s potential threat to the East China Sea. Taiwan remains as a major source of tension, particularly following recent defence contracts agreed by the Trump Administration.

30 October, 2020 – Guyana. The State Department has approved a possible Foreign Military Sale to the Government of Guyana of Bell 412EPi and 429 Helicopters and related equipment for an estimated cost of $256 million.

30 October, 2020 – Australia. The State Department has approved a possible Foreign Military Sale to the Government of Australia of Javelin missiles and related equipment for an estimated cost of $46 million..

26 October, 2020 – Taipei, Taiwan. The State Department has approved a possible Foreign Military Sale to the Taipei Economic and Cultural Representative Office in the United States (TECRO) of up to one hundred (100) Harpoon Coastal Defense Systems (HCDS) and related equipment for an estimated cost of $2.37 billion.

Raytheon Missiles and Defense is being awarded an IDIQ contract $722 million to provide the management, material and services associated with the sustaining engineering and product support services of the Standard Missile-3 Block missile variants for the US and Foreign Military Sales partners. The Missile Defense Agency is the contracting activity.

DEFENSE FINANCE AND ACCOUNTING SERVICE
Ernst and Young is being awarded a $263 million contract for financial statement audit services for the Navy. Fiscal 2021 operations and maintenance (Navy) funds in the amount of $50,270,811 are being obligated at the time of the award. The Defense Finance and Accounting Service is the contracting activity.

Hologic has been awarded a $119 million contract for SARS-CoV-2 molecular test production and capacity expansion. This contract provides for the expansion of manufacturing capabilities through additional equipment, material/supplies and facility infrastructure. The Air Force Life Cycle Management Center is the contracting activity.

29 October
US AIR FORCE
Boeing has been awarded a $342 million modification contract for KC-46A Aircraft 3 and 4 for Japan. This modification provides for the exercise of an option for an additional quantity of two KC-46A Japan aircraft being produced under the basic contract. Foreign Military Sales funds in the full amount are being obligated at the time of award. The total cumulative face value of this contract is $800 million. Air Force Life Cycle Management Center is the contracting activity.

US ARMY
Eli Lilly was awarded a $312 MILLION contract for procurement of monoclonal antibody therapeutic LY-CoV555. US Army Contracting Command is the contracting activity.

Astrazeneca Pharmaceuticals received a $286 million contract for the delivery of 200 million doses of AZD1222 vaccine for COVID- 19. US Army Contracting Command is the contracting activity.

DEFENSE FINANCE AND ACCOUNTING SERVICE
KPMG is being awarded a maximum $224 million labor hour contract for audit services for the Department of Defense Office of Inspector General audits of the Army financial statements. The Defense Finance and Accounting Service, Contract Services Directorate is the contracting activity.

US NAVY
Lockheed Martin, Missiles and Fire Control has received a $9 million order that provides non-recurring engineering for the production of target designator sets and electro-optical in support of AH-1Z Light Attack helicopters for Foreign Military Sales (FMS) customers. The Naval Air Systems Command is the contracting activity.

Lockheed Martin has been awarded a $193 million contract modification. It adds a $180 million for the production and delivery of four MH-60R aircraft, and exercises a $13 million option to procure three airborne low frequency sonars in support of the government of Greece. Foreign Military Sales funds in the amount of $43 million will be obligated at time of award. The Naval Air Systems Command is the contracting activity.

Applied Physics Laboratory has received a $101 million IDIQ contract for research, development, engineering and test and evaluation for programmes throughout the Department of Defense (DOD) within its approved core competency areas including: (1) experimental oceanography; (2) acoustic propagation; (3) underwater instrumentation and equipment; (4) marine corrosion; (5) acoustic and related systems; (6) simulations and signal processing; and (7) mission related and public service oriented research and development. This contract includes options which, if exercised, would bring the cumulative value of this contract to $218 million. The Naval Sea Systems Command is the contracting activity.