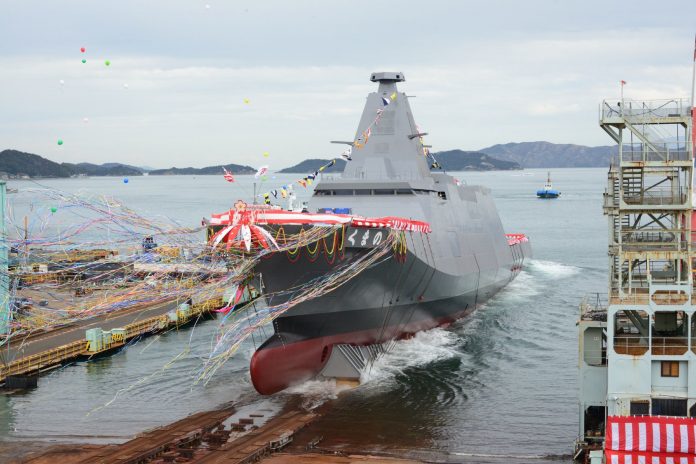 Japan’s Mitsui E&S Shipbuilding (MES) has launched the first of a planned fleet of 22 multi-mission frigates for the Japan Maritime Self-Defense Force (JMSDF).

The 132.5 m-long vessel, named Kumano, entered the water in a ceremony held on 19 November at the company’s shipyard in Tamano, Okayama Prefecture. Kumano is expected to be commissioned in March 2022.

According to the JMSDF, Kumano will have a standard displacement of 3,900 tonnes and will be operated by a 90-person crew as a result of extensive automation as well as its comparatively smaller size.

The frigate will be armed with a 127 mm main gun, a SeaRAM close-in weapon system, vertical launch system (VLS) for weapons such as the navalised Type-03 surface to air missile (SAM), and canisterised anti-ship missiles.

Organic mission equipment will include variable depth sonar and towed array sonar systems, and unmanned surface and underwater vehicles that will enable the vessel to undertake a wide range of operations including for anti-submarine warfare (ASW) and mine countermeasures (MCM).

A combined diesel and gas (CODAG) propulsion system has been selected, comprising two MAN 12V28/33D STC diesel engines and one Rolls-Royce MT30 gas turbine that is expected to generate maximum speeds in excess of 30 knots.

The frigate is based on a Mitsubishi Heavy Industry (MHI) design, although construction will be split between MHI and MES. MHI had earlier announced in November 2018 that it was awarded a contract to build the first two vessels at its Nagasaki Shipyard & Machinery Works in Nagasaki Prefecture, with the lead frigate originally scheduled for a November 2020 launch. However, construction had been delayed due to issues with its gas turbine, leading Kumano – which the JMSDF considers the second vessel of the 22-strong fleet – to be launched first.