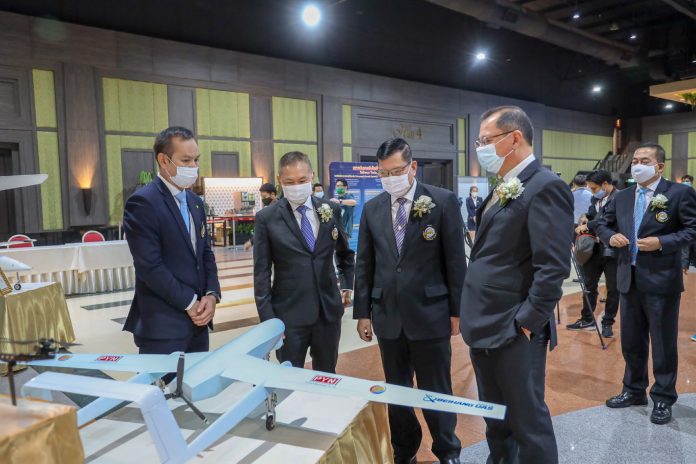 The Beijing-based Beihang UAS is also understood to be collaborating with the Thai defence ministry’s Defence Technology Institute (DTI) to develop a tactical-class UAV for RTA use, which could eventually be used to replace the ageing IAI Searcher MkII UAVs used by artillery units for target acquisition and damage assessment

Having gained success in the domestic Chinese market with its medium-altitude long endurance BZK-005 UAV which is in general use among the People’s Liberation Army (PLA) air, land, and sea services for long-range reconnaissance and electronic intelligence (ELINT) and electronic warfare (EW) missions, the company has developed export-oriented UAVs based on a comparable design, such as the BZK-005E and TYW-1 for the international market.

A model of the proposed UAV was also shown at several events, consistently depicting a twin-boom airframe with the engine positioned in the rear in a pusher-propulsion configuration, slightly swept-back wings, and a chin-mounted electro-optical sensor turret.

In November 2018, the company signed a memorandum of understanding with DTI, for co-operation in areas such UAV research and development, production, and flight training.

“After nearly 50 years of development, China’s UAV system has achieved significant results,” the company stated. “The military and civilian consumer-grade UAV systems are among the world’s advanced levels, and the application of civilian professional- grade systems has also [advanced greatly].”

DTI has also established the Unmanned Aircraft Systems Training Centre (DTI-UTC) to meet an expected demand for trained UAV operators across the government and public domains. The DTI-UTC has been certified by the Aviation Authority of Thailand (CAAT) and will deliver instruction for trainees to acquire qualifications including the Remote Pilot Licence (RPL) Instructor Remote Pilot Licence (IRPL). Courses are expected to commence from March 2021.