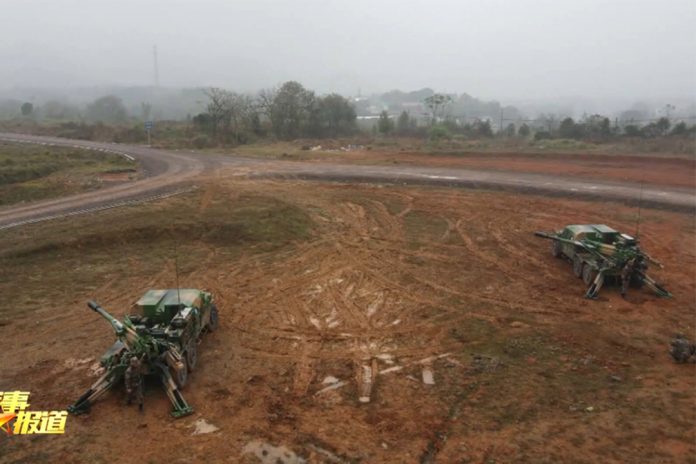 Referred to as PCL-171 it appears to employ a six-wheeled version of the Dongfeng Mengshi CTL181A off-road high mobility vehicle. Dongfeng Motor Group, the developer, is noted for its next generation family of light tactical vehicles specifically designed for the PLA and offering significantly improved mobility off-road and in more rugged terrain.

The vehicle configuration shown mounts the 122-millimeter gun howitzer on the rear bed. The 6 X 6 model has a curb weight of 6000kg and 4,150 kg payload making it an ideal platform for the gun and its stowed ammunition. The compactness and relatively lightweight of this gun-vehicle system allows it to meet the indirect fire support needs of light forces in a solution that offers superior mobility and therefore survivability and responsiveness over previous towed howitzer alternatives.

This high mobility tactical vehicle mounted howitzer replaces previous towed artillery. It offers the capability of quickly moving into position, halting, deploying, firing, and displacing to new positions in as little as several minutes. This reduces its vulnerability to counter-battery fires while assuring it can remain close enough to support the forward combat forces. It also has the benefit of being serviced with a a crew of only three (plus the driver), fewer than required for towed guns.

This system follows an increasing trend toward introducing truck mounted howitzers. It does, however, represent an application of technology by permitting the integration of a howitzer with its associated firing and recoil forces on such a light vehicle.

The PLA has fielded other truck howitzers like the although these have been on heavier medium truck chassis. The PCL-171 joins the PCL-09 122mm medium truck based howitzer, PLC-181 155mm 25 tonne medium truck based howitzer and other heavier truck mounted guns that have been recognized in the last several years. This wide introduction of truck-howitzers suggests the PLA’s possible intent toward a more dispersed and fluid approach to the future battlefields.