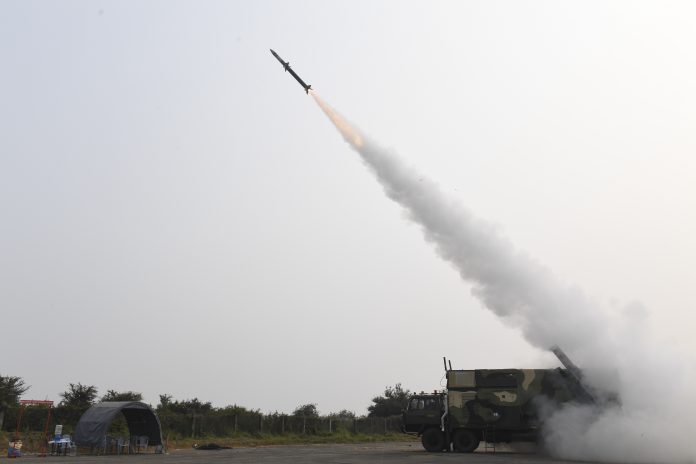 India’s Defence Research and Development Organisation (DRDO) has successfully conducted the first launch of Akash-NG (New Generation) medium-range surface to air missile (SAM) from the Integrated Test Range off the coast of Odisha on 25 January 2021.

According to the government’s Press Information Bureau (PIB), the missile “intercepted the target with textbook precision” and performed a series of high-G manoeuvres during its flight.

The PIB report also noted that the performance of the missile’s aerodynamic configuration and its avionics, along with the associated command and control (C2) system, was successfully validated during the trial. The test launch and the missile flight path were monitored by electro-optical targeting systems, radar, and telemetry systems deployed by the ITR.

The Akash-NG’s ground-based multi-function radar (MFR) was also tested on its ability to be integrated with the missile.

The Akash-NG is a next-generation SAM system being developed by the DRDO, Bharat Dynamics Limited, and Bharat Electronics Limited for the Indian Air Force (IAF) with the aim of intercepting highly manoeuvrable and low-observable aerial threats.

The Akash (Sky) family of SAM systems is designed to provide area air defence against various air threats and can be configured as a trailer-mounted/truck mobile system or as fixed air defence emplacements.

The system is essentially a modernised version of the Russian Kub (NATO: SA-6 Gainful) medium range SAM featuring a large number of indigenous subsystems and components, including a newer and more effective phased array radar for target tracking and illumination instead of the original system’s mechanically-scanned radar.

It is understood that the baseline Akash SAM system is capable of engaging targets at ranges from 3 km to 30 km, operating at altitudes between 30 m and 18 km.

A typical package can include surveillance radars and phased array passive electronically scanned tracking and guidance radar, and transporter-erector launchers (TELs). Each firing battery can include up to four TELs each armed with three Akash missiles, along with C2, tactical radar, and support vehicles.