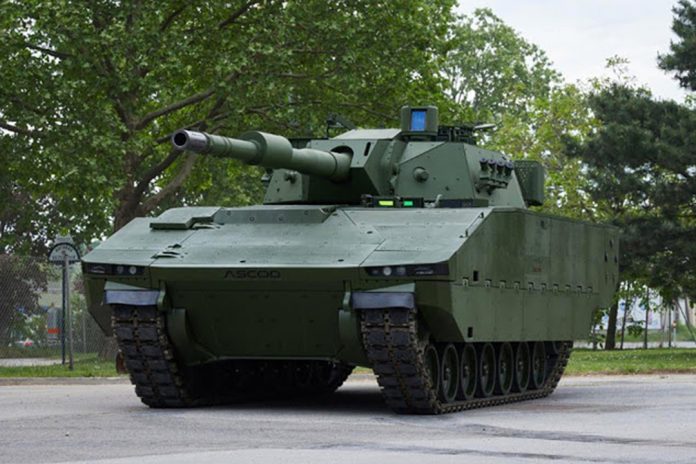 Elbit Systems of Israel announced on Tuesday 26 January 2021 it had received a contact from an un-named South East Asian country valued at US$170 million for its Sabrah “Light Tanks”.

The requirement will provide the company’s Sabrah two man turret equipped with a 105mm gun integrated on to both the tracked ASCOD chassis and on the 8X8 Pandur 2 wheeled armoured vehicle. Both vehicles are from General Dynamics European Land Systems (GDELS) which has been collaborating with Elbit.

Sabrah’s main cannon is a soft recoil design with fires NATO Standard ammunition. It uses an autoloader carrying 12 ready rounds plus 24 rounds are stowed in the hull. Equipped with a 7.62mm coaxial machinegun and 8 smoke grenade launchers the turret has basic STANAG 4 protection. Fire controls include a 360 degree panoramic sight, plus cooler thermal and high definition color gunners sight with laser rangefinder. The system is fully stabilized with target auto-tracking for on-the-move engagement.

Deliveries are to occur over a three-year period. This would be fourth army to adopt the ASCOD following Austria, Spain, and the United Kingdom.

GDELS Vice President of International Business and Services, Dr Thomas Kauffmann, stated “The modular design and open architecture of ASCOD is a great example (of) … a clear trend in the armoured vehicle segment to medium weight (≤ MLC 50) and multi-role platforms.”

Pandur 2 was originally developed by Steyr-Daimler-Puch (now part of GDELS) and is used by the Czech, Austrian, Indonesian, and Portuguese Armies. The Sabrah also on the ASCOD and Pandur was also selected in October 2020 by the Philippine Army in its Light Tank Acquisition Project.

Ten Pandurs and eight ASCOD based Sabrah’s are to be delivered in the Philippine project with the first anticipated in 2021.