SMi Group’s highly anticipated Future Soldier Technology conference will take place for its 7th year on 9th and 10th March 2021 to explore how emerging technologies and strategies are being used to overcome challenges in soldier modernisation programmes across the world.

This event is just £299 for military and government personnel to attend, and £999 for commercial organisations. Interested parties can register at http://www.futuresoldiertechnology.com/armadapr2.

As the event will take place live from the UK, SMi Group are delighted to introduce their host nation speakers from the UK MoD and British Armed Forces, who will be briefing on key capability areas and programme updates.

2021 Presentations from the UK MoD and British Armed Forces: 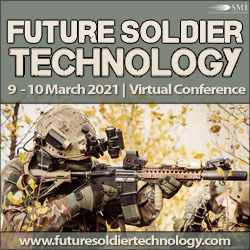 The event brochure containing the full agenda and speaker line-up is available to download from: http://www.futuresoldiertechnology.com/armadapr2.

As the leading event dedicated to Soldier Modernisation, Future Soldier Technology will provide a unique opportunity to explore dismounted soldier technology, as well as network virtually with key stakeholders from across government, military and industry.