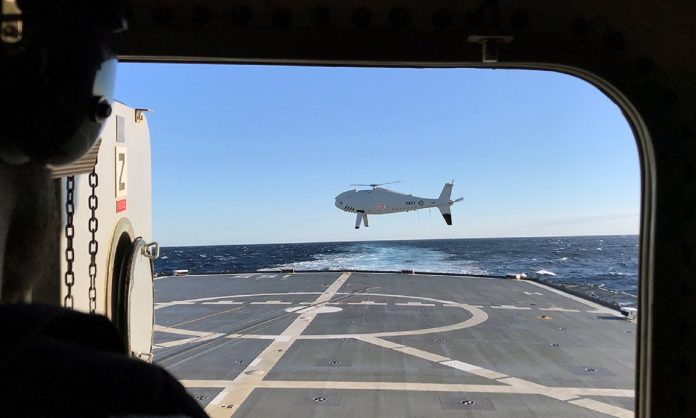 The Australian Department of Defence (DoD) has selected five companies for the Block One phase of Project SEA129 Phase 5, which seeks to boost the Royal Australian Navy’s (RAN’s) intelligence capability with new unmanned aircraft systems (UAS).

The statement did not identify the systems that will be offered by the selected companies, but Northrop Grumman subsequently revealed that it is partnering with Leonard to offer a solution based on the latter’s AWHero vertical take-off and landing UAS. Raytheon has teamed up with Schiebel Pacific to offer the S-100 Camcopter UAS, while Insitu and Textron Systems are expected to offer their ScanEagle and Aerosonde Mk4.7/HQ platforms respectively. BAE Systems has yet to reveal its plans.

“This Program will acquire maritime unmanned intelligence, surveillance, reconnaissance and targeting aircraft systems which will complement current sensors and systems on Navy’s ships, while boosting a ship’s area of surveillance,” said Minister Payne.

According to the DoD, SEA129 Phase 5 – also known as the Maritime Unmanned Aircraft System Continuous Development Program – is the largest maritime UAV acquisition of its kind in the world and comprises three main phases.

Block One seeks UASs that will be deployed from the Arafura-class offshore patrol vessels and Anzac-class frigates. Block Two will acquire UASs for use aboard the RAN’s other ship classes from 2029, and Block Three aims to upgrade all these UASs from 2034.