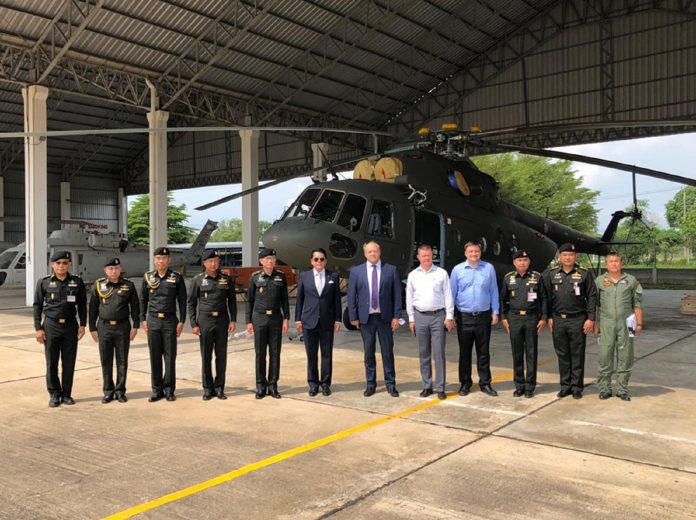 The Embassy of the Russian Federation in Thailand announced on its website that three more Mil Mi-17V-5 Hip-H’ medium transport helicopters have been delivered to the Royal Thai Army (RTA).

The helicopters were officially handed over to RTA official during a ceremony at U-Tapao airbase on 26 March. The latest addition brings the total number of Mi-17V-5 helicopters operated by the RTA to 10.

“Russia completed the transfer to Thailand of three Mi-17V-5 multipurpose helicopters, which were purchased as part of Thailand’s state program to provide humanitarian assistance and disaster response,” the embassy stated, noting that the handover was officiated by Russian Ambassador to Thailand Evgeny Tomikhin.

“Since 2011, Mi-17V-5 helicopters have been assisting Thailand in humanitarian and disaster response, delivering food to flooded areas during floods, dumping tons of water when extinguishing forest fires, and rescuing people in emergencies,” the embassy statement continued. “In 2018, Mi-17V-5 took part in the rescue of children from a flooded cave in Chiang Rai province in northern Thailand.”

Meanwhile, Russian Helicopters had earlier promoted its Ansat lightweight multirole platform and the Mi-171A2, an enhanced version of its Mil Mi-17 multirole medium helicopter in late 2018 in hopes of expanding its civilian and military customer base in Southeast Asia.

The RTA also initiated a study to acquire an initial batch of six new attack helicopters to replace its Bell AH-1F Cobras. Russia’s Mil Mi-28 and Kamov Ka-52 platforms were understood to be offered, although it appears that the service have selected the Bell AH-6I following a US State Department approval to sell six of these helicopters with associated armaments and support to Thailand in September 2019.