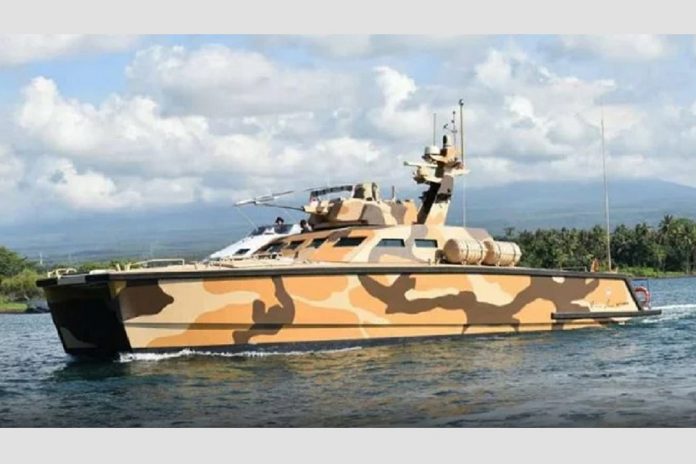 A consortium of Indonesian firms led by state-owned defence company PT Pindad launched a prototype of the indigenously developed Tank Boat catamaran combat vessel in the waters off Banyuwangi, East Java, on 28 April.

“It is hoped that the Tank Boat can support the Indonesian Armed Forces [TNI] in conducting patrols along Indonesia’s seas, rivers, and coasts, and also support coast guard operations,” PT Pindad in a statement released the next day. It is also expected to transport troops and provide close- and long-range fire support using gun or missile weaponry.

The design was first unveiled by PT Lundin as the Fire Support Vessel (FSV) concept at the 2014 Indodefence exhibition in Jakarta and is based on a 18m and 6.6m wide foil-assisted catamaran hull that is primarily constructed from carbon composite material and designed to operate in shallow waters with a draft of just one metre.

The Tank Boat is equipped with a pair of 1,200hp MAN V8 engines and MJP450 waterjets that will bring it up to a top speed of 40 knots, while a 6,000-litre fuel tank supports extended operations. According to PT Pindad, the vessel can travel transit distances of up to 600 nautical miles at 9 knots, and will be operated by a four-person crew and can accommodate up to 60 troops.

The company earlier partnered with Belgium’s CMI Defence to include its 105mm rifled gun as the X18 concept’s proposed main armament, although the resultant prototype is equipped with the Cockerill Protected Weapon Station Gen 2 turret armed with a 30mm automatic cannon instead.

Concept art of the Tank Boat has also depicted a variant with stern-mounted launchers for missiles.