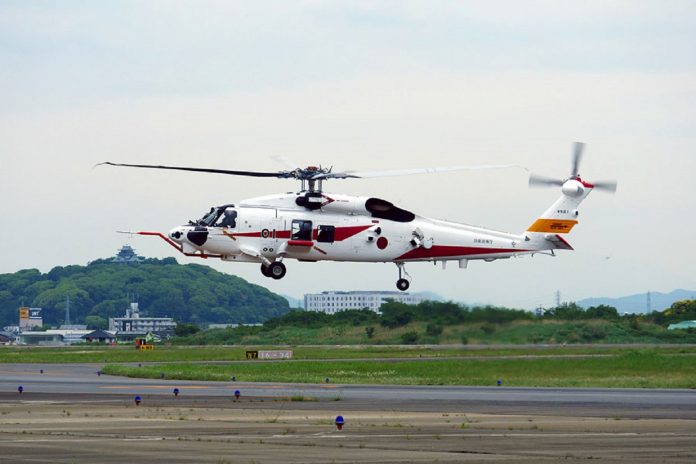 Japan’s Mitsubishi Heavy Industries (MHI) has performed the first test flight of an upgraded version of its SH-60K multirole naval helicopter, the company announced on 12 May.

According to MHI, the prototype helicopter conducted a 30-minute hover at Nagoya Airport, which is adjacent to company’s Komaki-Minami plant. It added that the helicopter features improved electronic systems and flight performance, although further details were not disclosed.

Development work on the improved model – which is derived from the Japan Maritime Self-Defense Force’s (JMSDF’s) in-service SH-60K helicopter – commenced in 2015 under a contract with the Japan Ministry of Defense’s (MoD’s) Acquisition, Technology & Logistics Agency (ATLA). Delivery of the prototype to ATLA is expected to be completed in 2021, following further flight testing.

The SH-60K itself is an improved version of the earlier SH-60J which is also in JMSDF service. Both rotorcraft are licence-built variants of the Sikorsky SH-60B helicopter, and are used by the JMSDF for missions such as anti-submarine-warfare (ASW), anti-surface warfare (ASuW) and search-and-rescue (SAR) operations.

MHI was awarded a US$63 million contact from the MoD to develop an improved version of the SH-60K in November 2015. According to official statements at the time, the new variant would be optimised for ASW operations and complement the JMSDF’s existing fleet of naval helicopters.

The MoD also earlier noted that the new variant will feature a new datalink and engine transmission, as well as new ASW-specific equipment such as a low-frequency dipping sonar and acoustic signal processor. The helicopter will also be capable of coordinating multiple rotorcraft during ASW operations.

Besides the SH-60 platform, the JMSDF also operates the Kawasaki Heavy Industries (KHI) MCH-101 helicopter for airborne mine countermeasures. The MCH-101 is a licence-built version of the AgustaWestland (now Leonardo) AW101 helicopter. The type is equipped with the Northrop Grumman AN/AQS-24A airborne mine-hunting system and AN/AES-1 Airborne Laser Mine Detection System (ALMDS).

ITPS wins one of its largest flight testing contracts