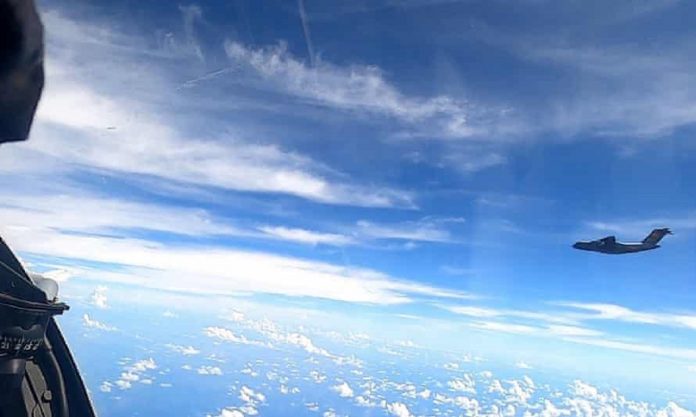 China has dispatched 16 Ilyushin Il-76 and Xi’an Y-20 heavy transport aircraft to the vicinity of Malaysia-administered shoals in the South China Sea as well as its national airspace, prompting the Royal Malaysian Air Force (RMAF) to warn of “serious threats” to the country’s sovereignty.

“The aircraft were detected flying in an in-trail tactical formation at a distance of 60 nautical miles from each other,” the RMAF said in a 1 June statement. “The long formation also flew with the same pattern and direction using a single entry and exit point.

The service also noted that the PLAAF aircraft formation had transited the Singapore flight information region (FIR) at speeds of around 540 km/h between altitudes of 23,000 and 27,000 feet, before entering Malaysia’s maritime boundaries and the Kota Kinabalu FIR, and approached as close as 60 nautical miles off the Sarawak coast.

According to the RMAF, the “suspicious aircraft” were first detected by an air defence radar in the eastern state of Sarawak at 1153 hours local time on 31 May. Their crew failed to respond to several attempts at communication by Malaysian air traffic controllers, prompting the service to scramble its Hawk 208 light combat aircraft from Labuan air base at 1333 hrs for interception and identification.

A map released by the Malaysian government revealed that the PLAAF transports flew close to the Luconia Shoals – also known locally as Beting Petinggi Ali – and James Shoal during their transit, both of which are claimed by the country and within its exclusive economic zone (EEZ). However, these shoals are also claimed by China under its far-reaching but ambiguous “nine-dash line”, which covers nearly all the South China Sea.

This is not the first time that PLAAF aircraft have approached Malaysia, although such a large force has not been observed before. The Chinese embassy in Malaysia told media that the aircraft were conducting overflights in accordance with international law and stressed that Malaysia’s territorial airspace was not violated, although Malaysia’s Foreign Minister Hishammuddin Hussein said on 2 June that he will summon the Chinese ambassador to “explain this breach of the Malaysian airspace and sovereignty”.

However, the RMAF described the aircraft’s lack of communication with air traffic control and their flight path as a “serious matter that threatens national security and aviation safety”.

In particular, the Y-20 airlifter can carry a diverse range of payloads include a Type 99 main battle tank or up to two Type 15 light tanks.