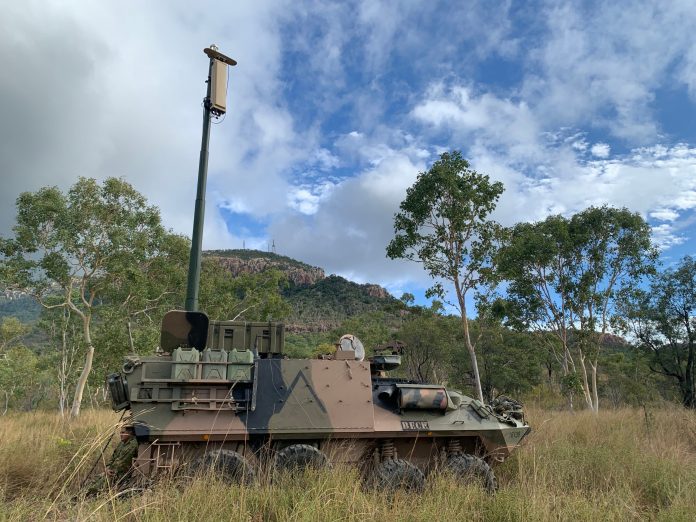 Australian counter-unmanned aircraft systems (C-UAS) specialist DroneShield has been awarded a contract to supply its RfOne MKII high-frequency (HF) direction finders to the Australian Army to enhance the service’s capabilities against unmanned aerial vehicles (UAVs), the company announced on 19 July.

The company did not disclose the size of the order but noted that systems are being delivered immediately to enable the army to assess its future C-UAS requirements and options.

“The deployment of these long-range sensors will highlight the flexibility, resilience, and capabilities of DroneShield equipment in a dynamic field environment,” DroneShield said.

Multiple RfOne MKII direction finders can be set up to enable accurate triangulation and positioning of small UAVs operating on ISM frequency bands, as well as their ground stations or controllers. According to the company, each system offers a maximum range of 8 km.

The RFOne MKII is one of the components of the fixed-site DroneSentry system, which uses the direction finders as a sensor, alongside a radar and electro-optical cameras, and can also be expanded with an RF jamming capability to function as the UAV defeat mechanism.

DroneShield has gained traction with its C-UAS products in recent months. It announced a two-year agreement worth A$3.8 million with an undisclosed Five Eyes intelligence community country in June and also signed a contract with a comparable value with the Australian Department of Defence (DoD) for electronic warfare/signals intelligence equipment.

The company subsequently disclosed it had received an initial order from what it described as a high-profile US critical infrastructure federal agency for a portable C-UAS defeat system.

In June DroneShield’s mobile DroneSentry-X C-UAS detect-and-defeat system successfully completed a six-week demonstration during an exercise with the US Navy aboard its M80 Stiletto maritime demonstration boat.

The demonstration validated a wide range of performance and evaluation metrics proving DroneSentry-X’s overall detection capability, detect-and-defeat ranges, on-the-move operation in various sea states, as well as effectiveness against UAV swarms involving a wide range of robotic and unmanned threats, although the company and the navy did not disclose further details.

“DroneSentry-X provides an unmatched capability and spectrum awareness for moving and fixed site platforms against a wide range of threats. We are pleased to complete this demonstration supporting an important part of the US Navy’s mission,” said DroneShield CEO Oleg Vornik, noting that the opportunity also enabled the company to prove the system’s ability to withstand the corrosive maritime environment without physical and performance degradation.