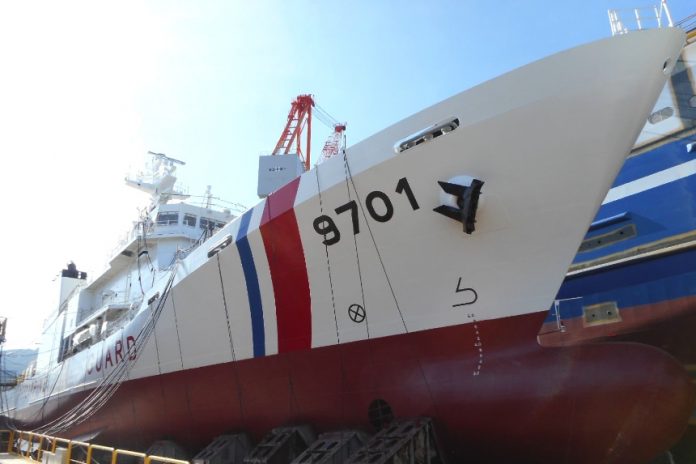 The lead MRRV is one of two large coastguard patrol vessels ordered by the Philippine Department of Transportation (DOTr) under a US$132 million contract in 2019.

“The [MRRVs] are capable of conducting sustained maritime patrols in [our] maritime jurisdictions, including the West Philippine Sea and the Philippine Rise,” said the DoTR in a 26 July statement, adding that the two vessels will significantly boost the capabilities of the PCG in conducting maritime search and rescue, maritime law enforcement, as well as humanitarian assistance and disaster response operations.

The vessel is derived from the Japan Coast Guard’s Kunigami-class and will be the largest-ever ships to be operated by the PCG once commissioned. It has an endurance of around 4,000 nautical miles when travelling at cruising speeds, although it can reach maximum speeds of over 24 knots.

“[The vessel] is equipped with secure communication systems for exclusive economic zone surveillance, a helideck and hangar for helicopter operations, an underwater remotely operated vehicle for subsurface search and survey, high-speed boats and other essential equipment for maritime domain awareness and law enforcement operations,” said Mitsubishi Shipbuilding in a statement.

The first MRRV is expected to arrive in Manila by March 2022, while the second vessel is scheduled to be handed over around two months later.

Funding for the two MRRVs has been provisioned under Phase II of the Maritime Safety Capability Improvement Project concluded between Manila and Tokyo in October 2016. The programme is in turn funded by an official development assistance loan from the Japan International Cooperation Agency.

From our Correspondents November 23, 2020

From our Correspondents February 1, 2021