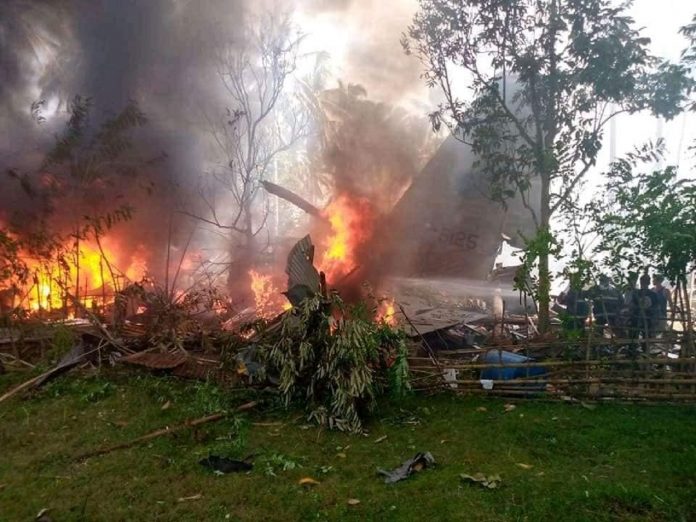 A Lockheed Martin C-130H Hercules medium airlifter operated by the Philippine Air Force (PAF) crashed in Patikul Village in Jolo, Sulu province, on 4 July. Aircraft #5125 had been carrying 96 military personnel at the time of the incident, the Philippine Department of National Defense (DND) said in a 4 July statement.

Secretary of National Defense Delfin Lorenzana announced that the aircraft crashed as it overshot the runway while attempting to land at Jolo Airport. All passengers aboard the C-130H – which was assigned to the PAF’s 220th Airlift Wing and operated by three pilots and five crew – were Philippine Army personnel being transferred to the province to bolster security against militants from the Abu Sayyaf group and other threats.

The DND announced that at least 50 people died in the incident, including three civilians on the ground, while 53 were injured, including four civilians.

“According to reports by the Armed Forces of the Philippines (AFP), the C-130 plane carrying nearly a hundred passengers was set to transport troops from Cagayan de Oro City to the Province of Sulu in Mindanao when the pilots failed to regain power and missed the runway,” it said.

Only recently commissioned into PAF service in February, the C-130H had been the first of two ex-US Air Force (USAF) aircraft acquired under the US Excess Defense Articles Program. The second aircraft is expected to be delivered by the end of the year.

Another C-130H operated by the unit had been written off after it caught fire at Clark Air Base in March 2019 and is understood to have four serviceable C-130s of various models remaining in its current inventory. However, the C-130 fleet is now grounded pending an investigation.

The C-130H incident comes after the PAF grounded its fleet of newly acquired Sikorsky S-70i Black Hawk medium utility helicopters following the crash of one of the rotorcraft with the loss of all six crew on 23 June.

The PAF stated that the helicopter had deployed taken off from Clark Air Base for night-time training manoeuvres before it went missing in the vicinity of Crow Valley near the airbase.